In early May, Atlantic 10 Conference Commissioner Bernadette McGlade sent a memo to the A-10 Presidents Council and the conference’s athletic directors before they completed a survey from the NCAA Division I Transformation Committee. The memo included points for them to consider so conference members could “convey consistent messaging.” One point was a proposed four-year term limit for the NCAA president, with only one opportunity for reappointment.

The memo noted that several survey questions, including the one that prompted the suggested term limit, were “highly subjective, open-ended, philosophical questions. The points listed can be considered and offer a perspective.”

Regarding a question about what elements of Division I must be changed to accommodate the needs of the “21st century” athlete, McGlade’s memo stated in part, “The executive office of the association (i.e., NCAA President) should have a term limit of four (4) years with only one opportunity for reappointment. The value of this structure could benefit the diversity of the membership in countless ways, ensure the highest levels of integrity and assure the continued evolution of expertise in leadership without compromise to any special interest group, philosophy, or perspective.”

On3 obtained the memo through a public records request. 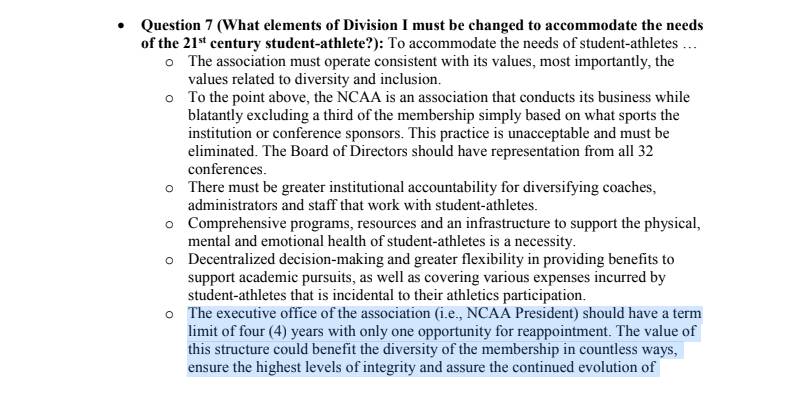 What is the Transformation Committee?

Last week, the Transformation Committee announced an initial set of recommendations for the Division I Board of Directors. The recommendations include a Transfer Portal window and providing more incentives to cooperate for parties involved in the DI infractions process.

The results of the Transformation Committee’s survey are reported in aggregate form and individual responses are confidential, which explains why the A-10 wanted to “convey consistent messaging.”

The shortest tenures have been just shy of six years, each of which ended prematurely. Dick Schultz resigned in 1993 following allegations and an independent report that said Schultz knew about an interest-free loan program involving athletes at the University of Virginia during his tenure athletic director during the 1980s. Myles Brand, the predecessor to current NCAA President Mark Emmert, passed away in 2009 due to pancreatic cancer.

The NCAA’s April announcement of the “mutual agreement” that Emmert will step down said his tenure will end by June 30, 2023 at the latest. If Emmert is still in his current position in November, then he’ll reach the 12th anniversary of his hiring. That’s triple the length of the A-10’s proposed four-year term limit and 50 percent longer than the proposed maximum tenure if a president were to be reappointed for a second term.

While the “diversity” mentioned in this part of the A-10’s memo was in reference to the variety of institutions that comprise the NCAA’s membership, a term limit could also promote individual diversity within the NCAA’s highest office.

The role of the NCAA’s president has only been held by white men. The last four have each been between 57 and 61 years old when they were hired and the last two were former university presidents.

Kevin McNamee, who retired as George Mason‘s deputy athletic director in June 2021 after 27 years in the athletic department, can provide perspective on both the A-10 and the structure of the NCAA.

McNamee, a former St. Bonaventure head swimming coach, coached in what is now the A-10 beginning when the Bonnies joined the conference in 1979, when it was called the Eastern Athletic Association. He later worked at George Mason when it moved from the Colonial Athletic Association to the A-10 last decade. He chaired the NCAA Swimming Sport Committee and he served on the NCAA Cabinet on Amateurism.

“I think there’s probably an overwhelming concern that the transformation that’s going to come is going to allow this super autonomy,” McNamee said. “I think this [memo] is worded to hopefully try to express a concern that the leadership has to recognize the full breadth of the Division I experience.”

However, he laughed at the mention of leadership “without compromise to any special interest group, philosophy, or perspective.”

“That’s going to be impossible to do,” he said. “I mean, I just think it’s a distinct impossibility. The reason being is because no one has any power right now other than [the Power 5]. They can take it and they can just walk.”

But he said he doesn’t think Sankey would be a co-chair of the committee if the SEC’s plans were to “ultimately just going to take everything and walk away. I think he’s clearly interested in giving them an opportunity to get this thing right in the NCAA.”

Given the uncertainty regarding the Transformation Committee’s recommendations, the NCAA and Emmert’s successor, McNamee thinks an imposed term limit is unlikely, even if there could be potential value in having one. Plus, McNamee wondered, what will the NCAA do to attract strong candidates for a role where the responsibilities are in flux, if not undefined?

“I cannot see the NCAA right now wanting to put term limits on anything,” McNamee said, “when you basically don’t know what that person is going to be in charge of.”

The A-10 wants to preserve the men’s basketball tournament, expand representation on Board of Directors

Here are some other notable points McGlade sent to A-10 members to consider including in their survey responses:

McNamee said he believes the first bullet point listed above, the preservation of the DI men’s basketball tournament in its current form, is the most pressing issue for the A-10.

“It’s the whole thing,” he said. “That’s everything. It’s the whole issue. For the Atlantic 10, it is the absolute key to any type of future. What they’re hoping for is that in some way, as I said, football goes outside but everything stays. Everybody stays inside in basketball and this thing moves forward in the way it is right now. The death knell would be if the P5, obviously, steps away and they say, ‘We’re going to run our own show and everything.’ Quite honestly, you watch what baseball’s doing right now in the College World Series with the SEC, it gives you a pretty clear indication of what they’re capable of doing because they have that commitment in all sports.

“It’s a fear, it’s a concern and it’s a reality that the biggest thing the Atlantic 10 and conferences like the Atlantic 10, outside of the Power 5, can do is to hold this whole thing together in a format that allows football to do its thing but everything else remains somewhat normal.”