ATLANTA — Before the NCAA’s interim NIL policy went into effect, a popular whataboutism in the argument against NIL was that athletes would have to pay taxes. When it comes to athletes paying taxes, the NCAA and its member institutions are responsible for both the cause and, in some cases, the effect: thousands of athletes who feel underprepared and want more resources.

In May, the NCAA released the results of an association-wide survey of more than 9,800 athletes. Forty-nine percent of respondents indicated “a need for educational resources on tax and financial literacy.” The apparent need for tax guidance is even stronger in Division I, too. Fifty-three and 55 percent of male and female athletes at the DI level, respectively, said they need more tax resources.

“Most institutions, they’ve been the reason why we haven’t had the right to exercise our NIL and profit off of working,” said UCLA quarterback Chase Griffin. Griffin, who was awarded Male Athlete of the Year at the inaugural NIL Summit, said he filed an extension for the 2021 tax year.

“It wasn’t in the culture because it was literally prohibited to be in the culture to have enough to money to even be taxed, so it’s new for everyone.”

H&R Block told Duke’s Emily Cole she owed self-employment taxes: ‘That was news to me’

The athletes who displayed the most peace of mind regarding their taxes recommend paying for professional tax services, or they said their parents helped them file. Michigan’s Hunter Dickinson‘s mom handled his taxes and former Rutgers guard Geo Baker call his while filing.

“If I didn’t have my mom, I’d be done,” Dickinson quipped.

After Cole heard she hadn’t earned enough to owe taxes, H&R Block tax specialists corrected the record. They told her, “‘No, actually, you have self-employment tax. You do have to pay taxes,'” Cole recalled. “So that was news to me and something that I’m really grateful I had them to help me navigate.”

“I knew going into tax season that I was going to freak out so I didn’t allow myself to freak out by getting an accountant, talking with my team, figuring out how to deal with all of that,” said Aquinas College volleyball player Chloe Mitchell. Thanks to the NAIA’s 2020 rule change that allowed athletes to monetize their NIL, Mitchell gained millions of followers on TikTok from her DIY videos. She has since launched the marketplace PlayBooked.

“I have an incredible support system behind me of adults who know what they’re doing,” Mitchell said. “At the end of the day, it wasn’t that bad and I know that’s not like a typical answer but I had my ducks in a row. I knew what I was doing for the most part and then I paid other people to do it so that they did it correctly, which is my biggest piece of advice.”

On the other end of the spectrum, stories about the pitfalls in college athletes’ financial literacy often involve four-letter words.

Baker has heard stories of athletes who don’t have a bank account and they don’t even know how to open one. “I’m like, ‘Holy [expletive],'” he said, “like that’s crazy. You know, they’re coming from areas where a bank account isn’t even needed.”

Illinois track athlete DeVontae Ford said the university has a mandatory class for athletes. He knows the instructors are fluent in the material, but he said they don’t always explain the flurry of new terminology, forms and deadlines in a way that’s easy for a tax novice to understand.

“They really made a good effort to try to teach us that stuff,” he said. But he said there’s a lack of practice and opportunities for students to work through hypothetical scenarios. He said when he has asked for help outside of class, counselors told him state law prevented them from helping.

In May, Illinois Gov. J.B. Pritzker signed an amendment that removed the prohibition of schools from arranging for a third party to provide compensation to athletes.

While at least a quarter of the athletes who responded to the NCAA’s survey said they weren’t interested in tax literacy or education, the overall results suggest a disconnect between a large number of athletes, if not entire athletic departments, and the rest of their respective university campuses.

Athletes who attend schools in the ACC, Big Ten and SEC told On3 they’re unsure if there are partnerships between their athletic department and their university’s business school. Either the athletic and main campuses are completely siloed or else they have poorly promoted partnerships.

“I’ll keep it more broad than just Rutgers, it’s every school,” Baker said. “I think right now the biggest part in NIL that’s missing is financial literacy, whether it be taxes or how to invest.”

Griffin, the UCLA quarterback, enrolled in a financial literacy class on his own. It’s the type of class that both Thomas and Cole said should be mandatory for college athletes.

“I think the same way where that’s available to students, the athletic department could definitely take it upon themselves to do that, or third parties,” Griffin said. “There’s a lot of third-party institutions, like banks, etcetera, that have pledged a lot of money toward building generational wealth and equity for Black and brown communities and there’s 90,000 Black student-athletes in Divisions I, II and III.

“This is an excellent opportunity to jump on that.”

Illinois’ DeVontae Ford: ‘You better pray to God that you do it right’

Many of the financial resources college athletes say they’re lacking should inherently exist on a college campus. Third-party providers can fill in the gaps for more specialized services. But those resources, whether provided in-house or externally, need to meet athletes on their terms and in language they can understand.

In one example of cross-campus collaboration, professors from Iowa State’s Debbie and Jerry Ivy College of Business led NIL workshops last fall on topics including taxes and contracts. Their 7:30 p.m. start times, however, may not have been ideal for athletes, presumably after a full day of classes and practice.

On3 obtained NIL education presentations from numerous Division I schools through public records requests and found slides that were often too crowded with text or filled with tax jargon. Confusing flow charts and seemingly forced, intentionally sleek-sounding acronyms added clutter to what can already be a challenging topic.

Others, however, such as the slides below from an NIL tax workshop at East Carolina, seem more conducive to learning. They’re simple and practical. The presentation also featured copies of a Form 1099-NEC and a Form W-2. The next time an East Carolina athlete sees one of these forms won’t be his or her first time. 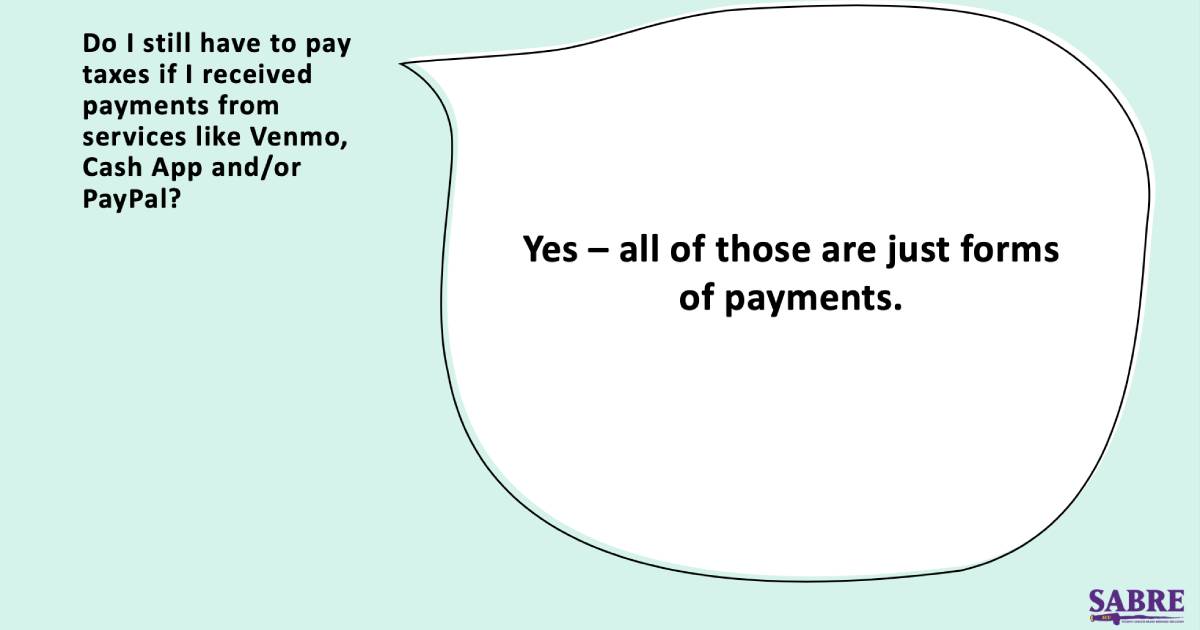 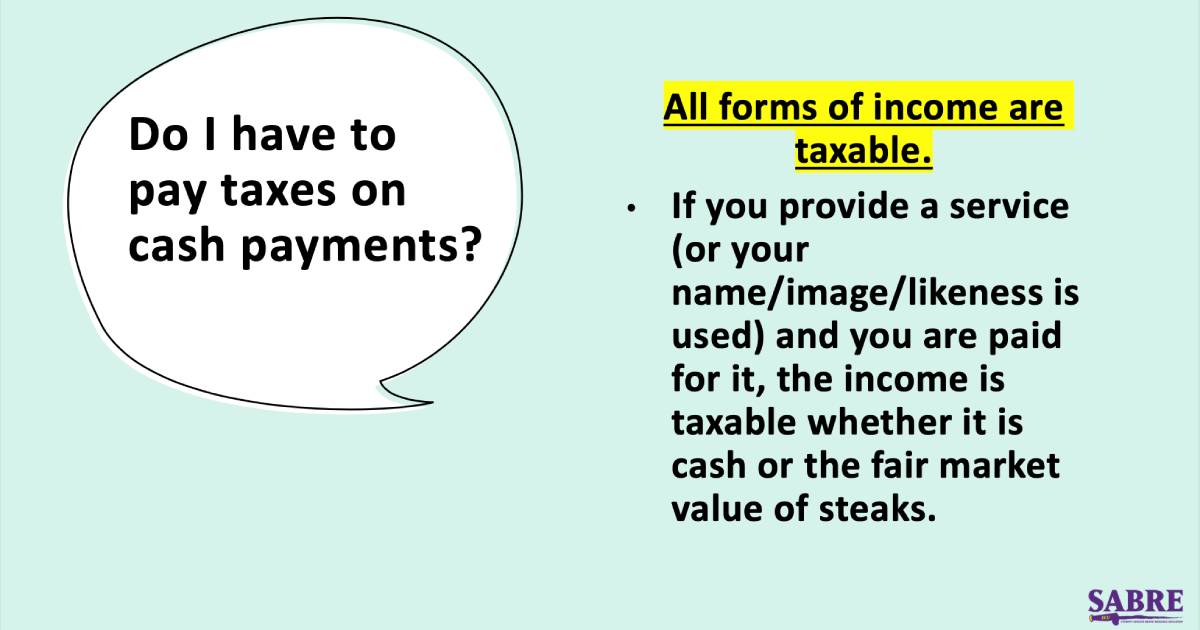 Thousands of athletes anonymously told the NCAA that they want more tax resources. This week, some of the athletes most prominently involved with NIL echoed that sentiment or recommended that the best solution is to have someone else file on their behalf.

Education is the foundation of college athletics. But in terms of tax education, that foundation appears to be cracked.

“You better pray to God,” said Ford, the Illinois track athlete, “that you do it right.”