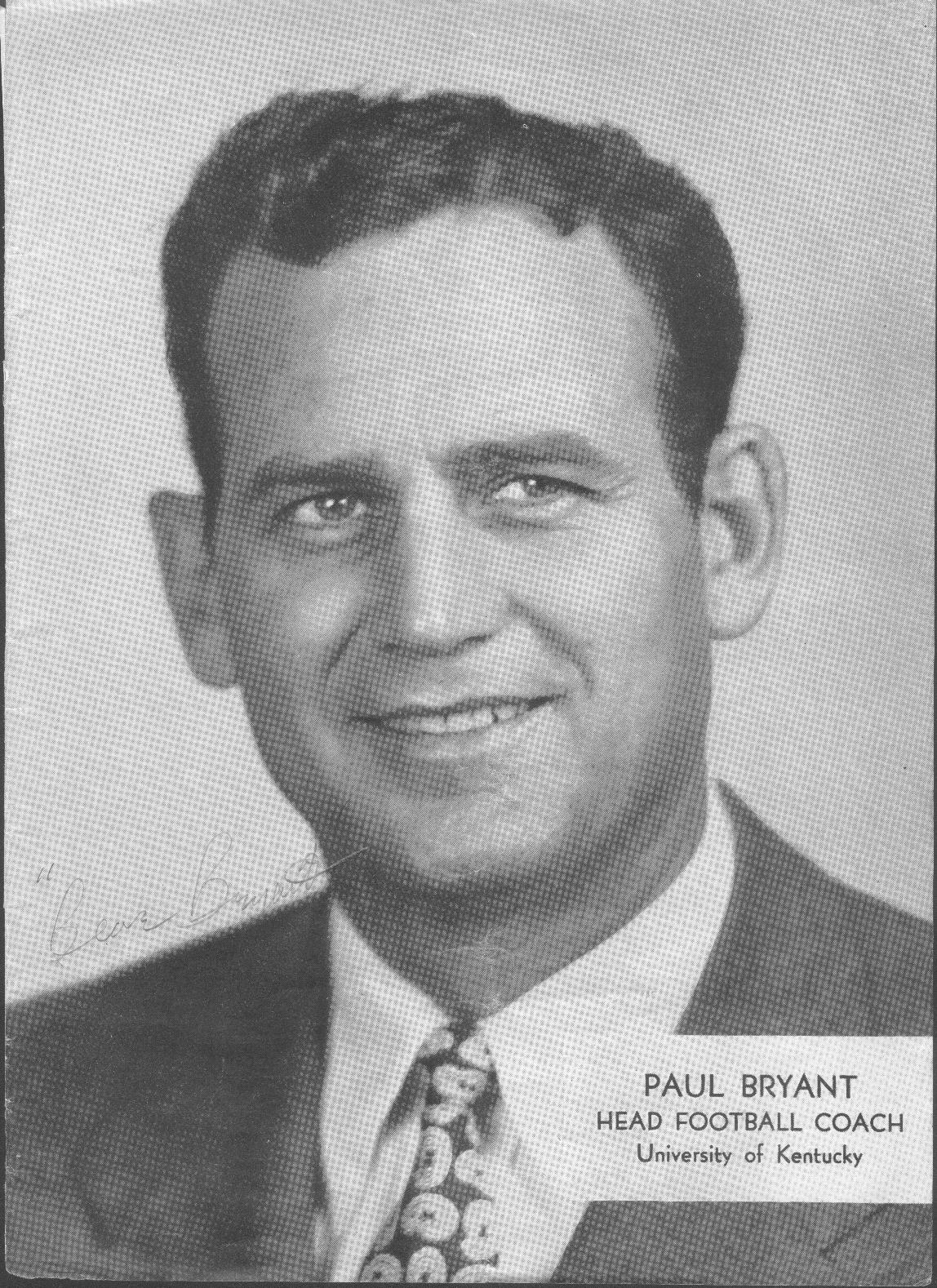 It's tough to say what kind of team Joker Phillips is looking at coming into 2010.  He returns nearly all offensive weapons but loses a lot on the offensive line and most of his defensive stars.  I think it's tough to expect Joker to improve upon the 7 wins of this season, but I think its also important to look at how other 1st year UK football coaches have fared in their rookie seasons, just to show that a 7-win season might be one of the better UK inagural campaigns in history: Overall record in 1st year: 2003: Rich Brooks (4-8) 2001: Guy Morris (2-9) 1997: Hal Mumme (5-6) 1990: Bill Curry (4-7) 1982: Jerry Claiborne (0-10-1) 1973: Fran Curci (5-6) 1969: John Ray (2-9) 1962: Charlie Bradshaw (3-5-2) 1954: Blanton Collier (7-3) 1946: Bear Bryant (7-3) So, the last 8 coaches at Kentucky have ALL had losing seasons in their first year, including 7 of the 8 having 4 wins or less. Now, I understand that some coaches inherit better or worse teams than the next one, BUT these stats prove that the sheer transition between one coach to the next in very often difficult. Meaning that another 6 or 7 win season next year should be accepted by the fans as a good jumping off point for the Joker era. Now, I will always say that the 2 big games on the schedule year in and year out are Louisville and Tennessee. Take a look at how these first year coaches did in their initial meetings with the Big 2: LOUISVILLE 2003: Rich Brooks (LOST 40-24) 2001: Guy Morris (LOST 36-10) 1997: Hal Mumme (WON 38-24) 1994: Bill Curry (WON 20-14) **5th overall season for Curry** Now, interestingly enough, all 4 of these coaches got to play their first meeting with Louisville in Commonwealth Stadium, whereas Joker will have to start his career in the Medium-Sized Pizza Pit. BUT, Kentucky will be favored this year, while both Brooks and Morris went into the game as underdogs. So, will a loss to UL be seriously damaging to Joker, or will fans cut him some slack for a road loss? I truly don't know, but a win over the Cards will certainly calm the fanbase for the time being. TENNESSEE 2003: Rich Brooks (LOST 20-7) 2001: Guy Morris (LOST 38-35) 1997: Hal Mumme (LOST 59-31) 1990: Bill Curry (LOST 42-28) 1982: Jerry Claiborne (LOST 28-7) 1973: Fran Curci (LOST 16-14) 1969: John Ray (LOST 31-26) 1962: Charlie Bradshaw (WON 12-10) 1954: Blanton Collier (WON 14-13) 1946: Bear Bryant (LOST 7-0) So, the last 7 UK coaches have all lost their first meeting to Tennessee. Does this affect your opinion of Joker if he was to lose to Tennessee next season? If I was Joker, at the absolute least, I would want a 6-win season with at least a split against UL and UT. If he was able to pull that off, I would consider it a successful 1st year for Phillips. Of course I am hoping for even better for 2010, but keep in mind what other 1st year coaches have done before you are too hard on the new coach at UK. Bryan the Intern has been writing for KentuckySportsRadio since December 2007.  He graduated from Western Kentucky University and currently works as a radio producer.  If you would like to contact BTI, send an email to [email protected].