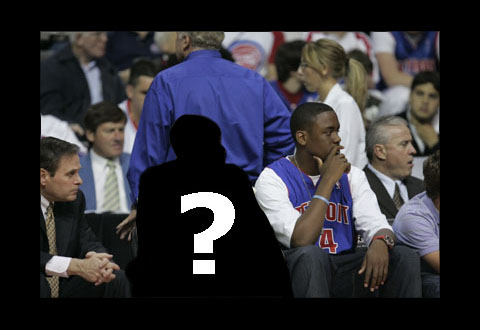 I'll be the first to admit that I get a little twinge of anxiety whenever I hear the name "World Wide Wes," or hear that someone in the media is coming out with an article about him. Why do I feel nervous? I can't explain it. I have no proof or concrete evidence or logic that justifies my nerves. That's the thing with World Wide Wes though, there's never proof, or concrete evidence or logic. For years his name has been thrown around in just about every sports circle imaginable. Coaches have tossed his name around. Media members have taken their swings, attempting to uncover anything at all. Instead, once again, the result is inconclusive at best. Jeff Goodman and CBS took their swing today. They went looking, asking those in the game, even allowing them to remain anonymous-- most likely in order to obtain more candid and honest responses. Surely something would come of it, right? Something concrete. Something that sticks. A story. There has to be a story, right? I read the article expecting to learn something--hear something, that I hadn't heard before. I didn't expect an end-all clarification, but I thought perhaps the perceived murky waters that World Wide Wes wades in might clear up just a bit. Instead, I am left with the same thoughts/questions I've held for a few years now when it comes to World Wide Wes: 1) If there really is a story out there, with everyone looking for it, how has no one been able to find it? Plenty of questionable characters surrounding the world of college athletics have been nailed for their wrongdoings. None of those guys have had the microscope on them nearly as much as World Wide Wes. People are looking. People are waiting. People are ready for any wrong move, living for the "a-ha! gotcha!" moment. I know people say "World Wide Wes is just smarter than all of the other guys." Maybe so. But come on? You don't think there aren't smart guys out there digging for any morsel of information to uncover the "truth" about World Wide Wes? If there's really something to him, if there's really something he is doing that is wrong or illegal or however else you want to label it-- HOW HAS NO ONE DISCOVERED IT? I've heard speculation, but no one has ever been able to bring him down with anything concrete. If he is so influential, as so many people have credited him for, shouldn't evidence exist if something is shady about it? And if there is nothing shady about it... why do we focus on him so much? 2) World Wide Wes still makes me nervous Regardless of the fact that, as pointed out in #1, no one has ever been able to prove anything wrong with an allegiance to World Wide Wes... the presence of the man still makes me nervous. I'm never sure if I want to see him at Kentucky events or not. I'm torn on whether or not I think this is a good thing. Something about the man and the mystery that surrounds him is scary. Call it a fear of the unknown, call it a case of the Thameltoe. It's obvious the man is powerful. He rolls with the best. He is everywhere. He's the guy people insert as a joke with photo shop into all of the most famous moments throughout history. Except no one has to actually photo shop Uncle Wes in the pictures. He's actually there.

3) World Wide Wes could compete with J.K. Rowling if he wanted If/when World Wide Wes decides to write a tell-all book someday (I don't care when...literally whenever he wants to), that book will fly off of the shelves. And I will be one of the first to buy it. I mean this with honest sincerity when I say that I have absolutely no idea what I would find between the cover and back of that book-- but I know that I would read every single page of it. And I'd be willing to bet you probably would too.