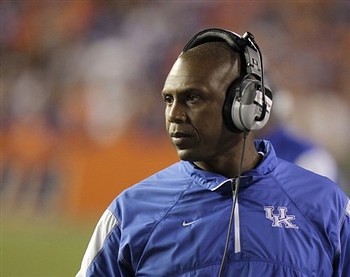 Don't worry, Joker. You'll get 'em next time. Denton Ramsey over at The Bleacher Report has a great slideshow that showcases the most disappointing performances for Week 4 in college football. There are 20 teams listed and several of them are in the SEC. Know who is missing? Kentucky. Why? Because at the end of the day, even though we expected a better performance from our team, we are an unranked school that went on the road and lost to one of the top 10 teams in the country. What happened in Gainesville wasn't a disappointment. It was the outcome that should have transpired considering the talent on the field Not only that, but the Orange and Blue had already experienced some turbulence and was looking to right the ship against us. Add to it the steadfast refusal of the opposing head coach to overlook our squad (even though Alabama is on the Gator radar) and several media talking heads putting Florida on upset alert and. . . well. . .by the time Saturday rolled around, Florida was more than ready to play they type of focused, near mistake-free football performance that championship teams consistently produce. While we all thought UK had a chance, realistically the only way the Cats could beat the Gators is if we played above our heads and caught Florida in a funk. There was no sneaking up on the Gators this time and even if UK was hitting on all cylinders, that Florida team would still have been tough to beat. Either way, take a look at the slideshow and laugh at teams that are much worse off than we are (like Duke and Texas) and glory in the fact that, late in September, UK has more overall wins than Tennessee or Georgia and is tied with South Carolina. Not too shabby of a situation to be in as we get ready for Ole Miss and our first conference win of the season.