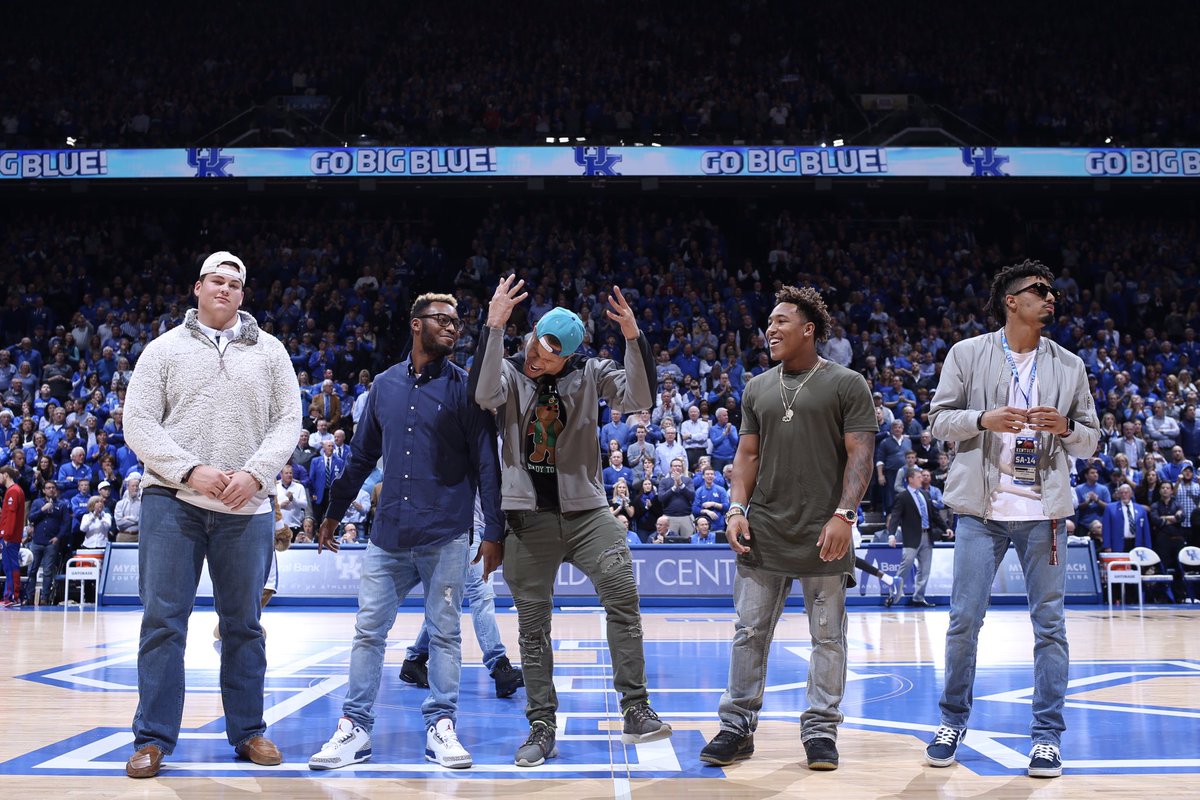 Members of the football team were offered at UK’s last Junior Day, via @UKFootball.

Mark Stoops’ second Junior Day is at an optimal time.  Rupp Arena will be rocking, Memorial Coliseum will be packed for DanceBlue; if only the warm weather held out for one more day, it would be the perfect weekend to visit UK.

Dozens and dozens of recruits are visiting from as close as Scott County — like four-star offensive tackle Bryan Hudson — or as far as the DMV.  Still riding offseason momentum, it’s the perfect chance to bring in the best of the best see how much UK has improved.  There are many more visitors not listed, including underclassmen, but here are some of the best from 2018 on campus right now.

Dayton’s Division I (Ohio’s equivalent to 6A football) football powerhouse is consistently a nationally-ranked team.  Vince Marrow has already pulled one from Wayne, hard-hitting safety and redshirt freshman to-be Tobias Gilliam.  In ’18, he could receive two commits from Wayne.

Alex Reigelsperger is a pass-rushing defensive end ranked No. 166 in the class by ESPN.  Pitt and Cincinnati are UK’s top two competitors.  Reigelsperger may have been close to committing to UK once before.  If all goes well, he could pledge before summer.

The Big Dog’s Biggest Dog in this class is L’Christian “Blue” Smith.  Blue’s name makes him a perfect fit at Kentucky, but an opportunity to play for Calipari still might not be enough to pull the 6’6″ wide receiver out of the state of Ohio.  A consensus Top 100 player, Top 25 according to Rivals, Ohio State broke normal protocol to give Blue an early offer.  A long fight lies ahead, but if Marrow can convince Blue to bleed blue forever, it will be his greatest recruiting accomplishment yet.

The other school taking up a lot of space on UK’s big board is Lakota West.  The suburban Cincinnati school has produced Wildcats before (most recently Mikel Horton) and now there are two talents considering heading south on I-75.

Defensive tackle Tyler Bentley recently named UofL as his leader, but this is the second time he’s visited UK in 2017.  Outside linebacker Xavier Peters is 247’s ninth-ranked outside linebacker in the 2018 class.  Penn State and Ohio State are also recruiting him heavily, but the Buckeyes have yet to offer Peters.

Greg Hart only has one year remaining and C.J. Conrad has just two (maybe less), which means tight ends must be a priority in the upcoming class.  Vince Marrow is looking for reinforcements in the Cincinnati Catholic school league.

Josh Whyle is a 6’6″ 220-pounder from La Salle who’s received interest from Cincinnati, Purdue and a few other Big 10 programs.  Moeller’s Brenden Bates is not flying under the radar like Whyle.  The four-star recruit is considered the No. 11 tight end in America.

Normally outside of UK’s reach, Stoops is extending recruiting territory into Michigan.  You’d think the coaches from Ohio wouldn’t give a damn about the whole state of Michigan, but that cliche is not true for all Ohio natives.

Tyrone Sampson is considered the No. 1 center in America, yet he hasn’t received many offers from Power Five schools….until UK offered earlier this week.   Four-star offensive guard Marquan McCall has received all of the big offers, but Kentucky isn’t shying away.  Outside linebacker DeAndre Square is the third four-star prospect from Michigan on campus this weekend.

Those are just the big names.  When one high-profile recruit is invited to campus, he usually brings teammates and underclassmen.  The exposure to the younger players in different areas like the DMV is an invaluable asset Stoops has acquired through four seasons at Kentucky.

Good morning and happy Monday to Big Blue Nation and congratulations to last night's winners at the 65th annual Grammy Awards, where the tribute to 50 years of hip-hop stole the show from my perspective and Beyonce set a record for the most Grammys...