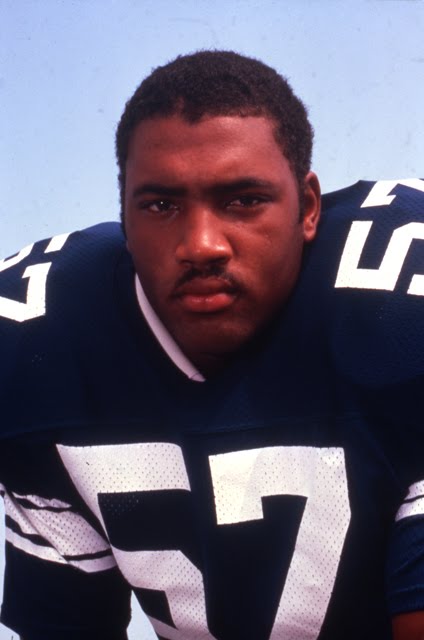 At today's Homecoming celebration, former Kentucky center Dermontti Dawson will be honored on the field during the first half of the game for his football achievements in college and in the NFL. Dawson played for UK from 1984-1987 under Jerry Claiborne, and enjoyed a standout career at Kentucky (lettering all four years, playing on the 1984 team that went 9-3 and won the Hall of Fame Bowl, and being named Second Team All-SEC his senior year) and in the NFL as a second-round draft pick with the Pittsburgh Steelers, where he was named a seven-time All Pro Bowl player, a six-time All Pro player, a member of the 1990s All Decade Team, and, most recently, a 2012 Pro Football Hall of Fame inductee.   Not too shabby for a guy who didn't even want to play the sport originally. After not enjoying the sport during his freshman year, Dawson sat out as a sophomore and returned only after the team's head coach, Steve Parker, stopped him in a hallway and asked him to try out for the team. With Parker's initial support, Dawson found his love for the game and met lifelong friends and teammates in Marc Logan and Cornell Burbage, who would play with him in both high school and college. Dawson also played alongside current Kentucky head coach Joker Phillips during his Kentucky career.   According to Guy Ramsey, Dawson credits Kentucky and Coach Claiborne for igniting his passion for football:

With incredible athleticism for his size, Dawson always had the potential to be great, but it wasn't until after years of hearing then UK head coach Jerry Claiborne's message of "Be the best" that he reached it. "I heard that for five years when I attended UK and one day a light went off in my head and said, 'Why am I out here if I'm not going to be the best player on the field?' " Dawson said. "That's what my goal was no matter the task and that became my purpose."

Dawson's celebration figures to be one of the few bright spots in today's game against Georgia, so join the rest of Big Blue Nation in honoring Dawson's achievements as he signs autographs for two hours before the game in the Wildcat Refuge. The first 10,000 fans to enter the game will also receive a Dermontti Dawson rally towel, which will come in handy when mopping up tears after watching the game.   @KristenGeilKSR