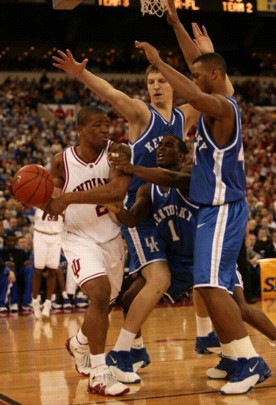 AP. It wasn't Mike Davis this time, but the Indiana basketball program once again had a meltdown at the hands of Kentucky. The No. 1-ranked Cats (6-0) outscored the Hoosiers 48-15 after intermission to claim their most lopsided win ever in the series, 80-41, eclipsing a 35-point victory in 1965. The blowout was UK's 11th win in the past 13 meetings between the border rivals. "I was expecting a tough, full 40-minute dog fight," UK junior Chuck Hayes said. Instead, the Cats got 20 minutes of fight from the beleaguered Hoosiers. Despite shooting 60 percent and holding Indiana to just 34.6 percent shooting in the first half, the Cats turned the ball over 13 times and were routinely beaten to loose ball by the hustling Hoosiers. Predictably unhappy, UK coach Tubby Smith didn't hesitate to demand more effort from his team in hoped of extending the 32-26 lead. "I was very pleased with out effort, especially in the second half," Smith said. "In the first half, we didn't make the hustle plays or get loose balls. We bounced back in the second half with a different attitude. "I told them they were going to pay if they didn't play a lot harder. Not in those words, but I let them know I was disappointed." The message came through loud and clear as UK buried the Hoosiers right from the start of the second half. Hayes immediately scored two buckets inside, the Gerald Fitch added a jumper and Cliff Hawkins completed a three-point play off a turnover to up the lead to 41-26. Before long, the Cats had ripped off a 22-5 run and stretched the lead to 23 in eight minutes. It never got better for Indiana. With Bracey Wright the only scoring threat (he scored 23 of IU's 41 points), UK hunkered down on the shooter and made the rest of the Hoosiers beat them. It didn't happen, as only four players scored and Wright and Sean Kline scored 38 of the 41. "Wright is their No. 1 option," Hawkins said. "They tried to get him as many shots as they could, but you've got to involve other people. "He got his numbers, but we won by 30." Actually, it was nearly 40, a point spread no one saw coming, even UK's starters, who were shocked when they exited with six minutes to go and the margin sitting at 31. "I asked a couple of guys, Ã”When did we separate?'" Hawkins said. "I knew we were winning, but not by that much."

Beaten Like a Rented Mule Although defense was the key, holding IU to 6-of-36 after halftime, the inside tandem of Hayes and Erik Daniels dominated the post for the Cats. In fact, UK won the battle of the glass 54-25, an unheard of differential for a team supposedly lacking in size. Both Hayes and Daniels tallied double-doubles, with Kelenna Azubuike not far behind. "We were killing them down low, everything was working," Fitch said. Smith said the game plan was to exploit an Indiana interior defense missing 6-foot-11 shot blocker George Leach. "They were playing behind us and Erik and Chuck realized there wasn't a shot blocker and were willing to attack the basket," Smith said. "They didn't double down and I'd put Erik and Chuck in the post one-on-one against anyone in the country."

On this day, Smith just might have won those battles.