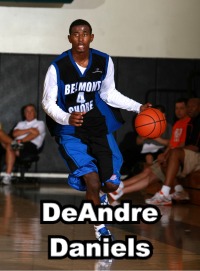 Just as we've all started to come to terms with the whole "visits to USC and UCLA, talking with UK" scenario for DeAndre Daniels, a new suitor has emerged for the five-star small forward's services in 2010 - prep school.  According to Evan Daniels, he would not be surprised if his brother from another mother opted to attend a prep school in 2010 and remain in the class of 2011.  In fact, he might be leaning that way.  Or, it might just look like that because Evan Daniels has one shoe on.