Photos via @WYMT & @ESPN[/caption] Kinda weird, right? Not many would have thought that the two most important ex-Cats this NBA Playoffs would be the third-best player on the 2010 squad and a certain wrestling fan who failed to hop the NCAA’s Walls of Jericho-esque regulations? [embed]https://www.youtube.com/watch?v=ii-AenSGoJ8#t=7m00s[/embed] After watching a Finals Game 1 on Thursday of what could prove either an affirmation of a historic run or one of the biggest Finals upsets of all time, it’s easy to wonder why no UK stars showed up. Well, truth is that we’re still in phase one of the Cal-era NBA takeover. It’ll take a while for our cream of the crop talent–Davis, Wall, Towns, Boogie–since, at the time of their selection they were all picked up by pretty garbage teams. But a couple of Cal’s Cats made it all the way to the NBA’s conference finals this year. Not expected to become centerpieces in their respective franchises, Patrick Patterson and Enes Kanter both found pivotal roles via trade on two of the best teams in the NBA–the Toronto Raptors and the OKC Thunder 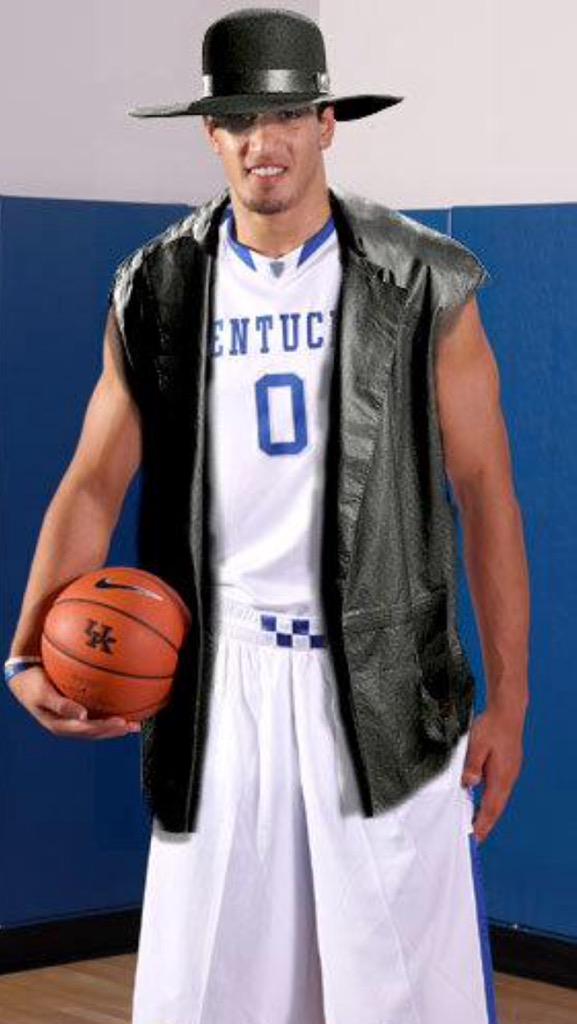 via @NBAnoBrasil[/caption] The UnderKanter got a HUGE boost last offseason, earning himself a max contract–just a few stacks short of Russell Westbrook’s contract. Surprisingly, though, Kanter averaged just 21 minutes per game this season, and played only 16.6 per game during the playoffs. The numbers also make you think twice about Enes’ playing time, or lack thereof. Kanter boasted, by a wide margin, the third-highest PER (player efficiency rating) on the Thunder, but only clocked the eighth-most minutes per game during the season and seventh-most in the playoffs. Maybe Billy Donovan, OKC's new head coach, is still compensating for Matt Walsh's hurt feelings? Maybe the Turkish government is conspiring to suppress our mustachioed alum’s rise to stardom? All those crackpot theories get thrown out of the window when you watch Enes play defense. Simply put, he’s a matchup liability. During the Thunder- Spurs series, Kanter was neither long nor quick enough to challenge Lamarcus Aldridge’s trademark turn-around J, and he could only go out against the less fleet-of-foot Warriors' players like Andrew Bogut. Even then, the Turk would get eviscerated by the Warriors constant cuts and screens, leaving him to guard a Curry, Thompson, or Green who’d make his Hyperdunk shoes look like skates or cinder blocks. Here’s a compilation of Kanter’s defensive deficiencies while on the Jazz:   [embed]https://www.youtube.com/watch?v=yGv0E8H_85I[/embed]   Blunders aside, Kanter is an absolute beast on the other end of the court, with a knack for finding the basket by backing down opponents or using his face-up game. He sees plays before they unfold, and just as frequently makes his own.   [embed]https://www.youtube.com/watch?v=rE8w2-1ZhDQ[/embed] A little more varied than the trademark Poythress one-dribble spin right move, no? Along with his vacuum-like rebounding ability, those kind of plays show why our beloved benchwarmer/tombstone-er was and is worth max money, and why, if KD signs an extension with OKC, we might see him in the NBA Finals in the near future. What a shame this man never got to rock Kentucky blue, though that would have meant less of a chance of Jorts coming back into style.

Ahh, the jewel of the Billy Gillespie era and KSR’s rise to prominence, how could we forget you? Patterson, a favorite in Lexington, played an increasingly important role in fellow ex-Cat Dwane Casey’s Raptors system as the playoffs progressed. Though P-Patt never started once in the regular season, he was called to start for nine of the Raptors 20 playoff games. Patterson made sense down the stretch because he gave the Raptors a shot of versatility, effectively switching onto high-profile ball-handlers like Paul George and Lebron James and stretching the four by threatening from three-point land. His efforts proved to be the decisive factor in game 7 of the Miami series and possibly Dwane Casey’s tenure with the Raptors as he tallied 11 points and 11 rebounds by matching up well with Miami’s smaller bigs and out-muscling rookie/Dukie Justise Winslow. While no one would accuse him of Draymond Green’s tom-kickery, his role as a Raptor was eerily similar to Green’s human swiss army knife style. [embed]https://twitter.com/NotJerryTipton/status/738552309131579393[/embed] Kicks to the throat/groin not included in the Patterson-brand. Oh, and Patterson came into his own mentally as well, showing that he was unafraid to belittle one of the NBA’s biggest stars and adequately sum up our feelings about his whining: [embed]https://twitter.com/Zannybaba/status/735294156541681666[/embed] While this Finals could be a little difficult to watch as an average non-NBA minded Kentucky fan, it’s important to pay our respects to the guys who showed out for the playoffs. As stars like Kobe ride off into the sunset, the NBA’s current elite will have to pass the torch to the next generation–and as long as Cal’s on the bench, you can bet that that generation will include a whole lotta blue.