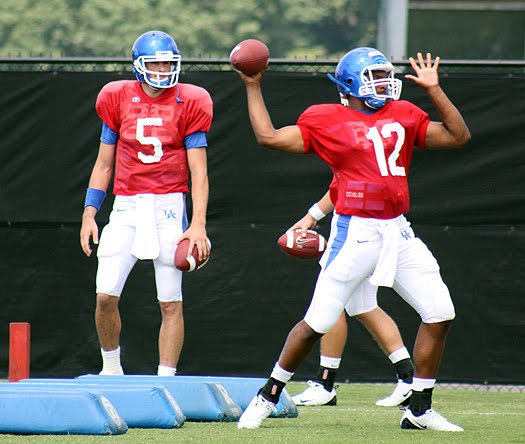 Tony Barnhart of the Atlanta Journal-Constitution is breaking down things in the SEC and today the self-proclaimed Mr. College Football ranked the quarterbacks of the SEC East. The three-headed monster in Lexington ranked fourth behind South Carolina, Florida, and Georgia, respectively. Here's what Barnhart had to say about Mike Newtakowski:

4. Mike Hartline, Morgan Newton, Ryan Mossakowski, Kentucky: New head coach Joker Phillips is going to have to get this race down to two guys pretty soon. Hartline has the edge because, despite a knee injury in 2009, he has played in 21 games and started 14. I think Newton, the former Indiana High School Player of the Year, is the most talented of the three (by far) and has the most upside. He impressed me with his poise on the road when Kentucky beat Auburn and Georgia. He can make plays with his arm and his legs. Mossakowski has a good arm but was limited as a true freshman last season because of shoulder surgery. My guess is that he’ll be the odd man out. Hartline will be the starter because he makes the fewest mistakes. But Newton will be a big factor because with him in the lineup, the Kentucky offense will three big playmakers in Newton, wide receiver Randall Cobb, and running back Derrick Locke.

We're just over a month away from the season so let's fire up the ol' the starting QB debate.  Tony Barnhart says Hartline, but Newton is the starter on NCAA Football '11 - and we all know that game is legit.  My vote goes to Hartline. Who ya got? [Breaking Down The Quarterbacks: SEC East]