Hayes. Meeks. Bogans. Fitch. Prince. Patterson. Wall. Porter. There are so many memorable names from Kentucky basketball this decade.  And, there are so many that aren't.  In remembrance of those who suited up for the blue and white, but just didn't pan out, I present to you the All-Never Forgotten team of the decade.  These men gave their all for Kentucky in practice, in warm-ups, in hype, and, some, in recreational drug use. They may not have a UK diploma or the fan admiration, but that doesn't make them any less of a Wildcat. 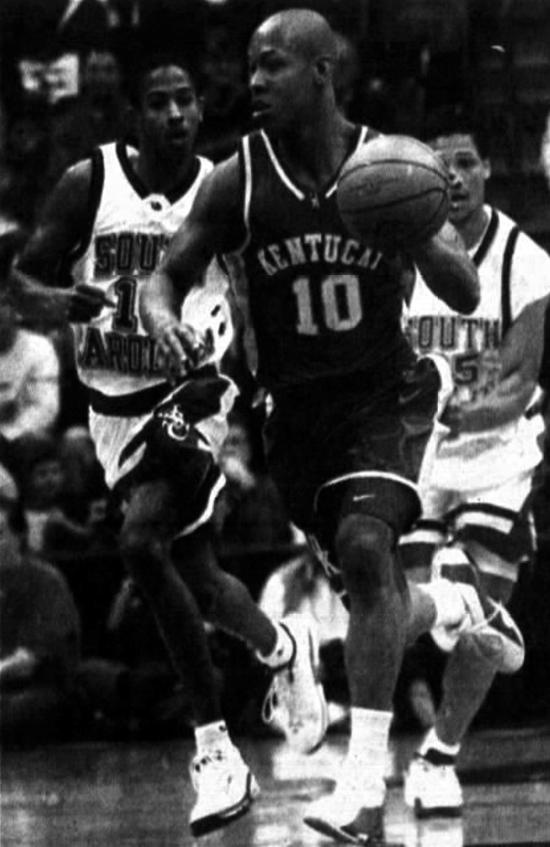 First Team All-Never Forgotten C — Jason Parker - At one time, Jason Parker was considered the next big thing for Kentucky basketball.  Parker, a Parade All-American in high school, started all 34 games for Kentucky in 2000-2001, averaging 8.6 points and 4.7 rebounds a game, earning him Freshman All-SEC honors.  The following season, he blew out his knee while "horse-playing" in the locker room before Big Blue Madness.  Parker sat out his sophomore year to rehabilitate the injury, but was dismissed from Kentucky for undisclosed disciplinary reasons during that time. F — Mark Coury - Coury played two seasons for the Cats after walking on to the team as a freshman.  He earned a starting role as a sophomore in 2007-2008, which led to an outbreak of "WTF is Billy G doing?" household moments across the great state of Kentucky.  In 29 starts, Coury averaged 2 points in 10 minutes of action per game.  He also gave us this picture, for which I will forever be grateful. F — Desmond Allison - The first heartbreak of the decade was Desmond Allison.  Allison was a star in his two years at Kentucky before his dismissal from the team in March of 2000 for D.U.I.  After a few more run-ins with the law, Allison went on to play Division II football for South Dakota.  But, why am I telling you this when you could watch the story of Desmond Allison told over an inspirational Disney-like soundtrack. G — Rashaad Carruth - The poster boy of college basketball headcases.  The former sharpshooting McDonald's All-American averaged 6 points for the Wildcats as a freshman before transferring to Okalahoma, and then to Indian Hills C.C., and then to Southern Miss.  While at Kentucky, Carruth was suspended for refusing to take shots during a game. G — Dusty Mills - In Billy Gillispie's first season at Kentucky, he held an open tryout for UK students and only one player made the team - Dusty Mills.  At 5'3, 125 lbs. soaking wet, Mills was officially living the dream.  That is, until, he was kicked off the team for laughing during a game.  There's not a day that goes by that I don't wonder what could've been had Dusty Mills been apart of the Calipari system.  What a shame.

Second Team All-Never Forgotten C — Morakinyo Williams - "The Member" transferred to Duquesne after one season under Billy G.  They say the heartbreak of seeing his mini-me, Dusty Mills, leave the team was just too much to take for the 6'11 Englishman. F — Bernard Cote - Bernard Cote of St. Lambert, Quebec played in 52 games in two seasons (2002-2004) at Kentucky.  Chances are good that you had forgotten about him.  Now, he'll live in your heart forever. F — Cory Sears - Sears, a Corbin native, scored 8 points in two years at Kentucky.  He transferred to Union College after logging in a few hours with Rashaad Carruth in Tubby Smith's doghouse. G — Adam Williams - The accidental Wildcat.  Williams played in about as many games at Kentucky as I did.  This led to his transfer to Marshall, which he announced at Logan's Road House. G — Dwight Perry - Dwight Perry was the official hype man for Kentucky basketball.  While his teammates were knocking down three pointers and taking it coast to coast for the slam, the walk-on was exerting just as much energy in his celebrations from the end of the bench.  Dwight was always the first to the huddle during a timeout, and, he currently holds the NCAA record for most high-fives given to teammates during a single season.

Third Team All-Never Forgotten F — Rekalin Sims - The juco transfer played one year at Kentucky before transferring to Fresno State where he beat up and robbed a disabled man. F — Matt Pilgrim - He was a beast. G — Adam Chiles - The Louisville Ballard star transferred to Vincennes after spending time with Sears and Carruth in the very populated Tubby Smith doghouse as a freshman. G — Alex Legion's Mother - God has a plan for all of us. G — Landon Slone - Like many players during the Gillispie era, the Landon Slone story is still fresh on our minds.  That's why he's Third Team All-Never Forgotten.  Had his story just been a little bit more unique, Slone is unanimous first teamer. Honorable Mention - A.J. Stewart, Kevin Galloway, Donald Williams, Buddy Halsell, Adam Delph, Kerry Benson, anyone else Billy Gillispie yelled at.