Subscribe Now7-Day Free Trial
Article written by:Freddie Maggard
[caption id="" align="alignnone" width="1200"] David Banks | Getty Images[/caption] Northwestern head coach Pat Fitzgerald is a defensive guy. He played linebacker for the Wildcats and did so at a very high level. A consensus college All American; Fitzgerald’s fierce, on-field coaching personality and cerebral approach to the game of football is mimicked by his defensive scheme and personnel. As you can see below; Northwestern held six of its twelve regular season opponents to less than 100-rush yards. More impressive; the Wildcats limited perennial run-powers Iowa to 89 and Wisconsin to 109-yards on the ground. This defensive strength should present a major concern for the Big Blue Nation given Kentucky’s propensity to rely heavily upon first team All SEC RB Benny Snell and its ground attack. This chart highlights Northwestern’s opponents, points allowed, and total yards divided by the run and pass. Let’s take a look:

As our first Northwestern post that concentrated on its offense referenced; the Wildcats average 23.1 first downs per game. That’s more than three of the Football Playoff teams: Clemson, Alabama, and Georgia. This stat-line is an indication of the Wildcat’s ability to possess and maintain the football through long, extended drives. It’s also ran more offensive plays on the season than any other UK opponent including Missouri, Louisville, and Ole Miss. It must be factored that Northwestern played three overtime games in 2017. Defensive numbers paint a picture of a run-stout, 4-3 team that’s comprised of efficient tacklers that are excellent at impeding opponents from establishing the run. Add in its inconceivable defensive red-zone efficiency, and you get a typical Pat Fitzgerald hard-nosed, no-nonsense defense. Let’s take a look at how Northwestern’s defense stacked up Big Ten competition:

Northwestern executes a 4-man front which means it features two defensive tackles and two defensive ends. All four defensive linemen align in a three-point stance or with their hand in the dirt/turf. The defensive front is led by All-Big Ten defensive lineman Joe Gaziano. The sophomore leads the league with 8 quarterback sacks. Its linebackers are yet another reflection of their head coach. Freshman LB Paddy Fisher’s 110 total tackles ranked 4th in the conference. He was named All-Big Ten as well as the league’s freshman defensive most valuable player. He’s joined by LB Nate Hall. The veteran racked up 16.5 tackles for loss which was good enough for 2nd in the conference. Combined; Hall and Fisher are a formidable duo that ranks in the top 3 of inside linebackers that Kentucky has faced in 2017. Both are excellent football players. The secondary is controlled by a pair of All-Big Ten performers: Nickel Kyle Queiro and Safety Godwin Igwebuike. However, Northwestern ranks 14th or last in its conference by allowing 247.6 pass-yards per game. Notably; Michigan State threw for 445-yards in an overtime loss to the Wildcats and Jeff Brohm’s Purdue Boilermakers tossed it around for 398. It has been vulnerable to long pass plays especially against taller receivers. [caption id="" align="alignnone" width="2048"] 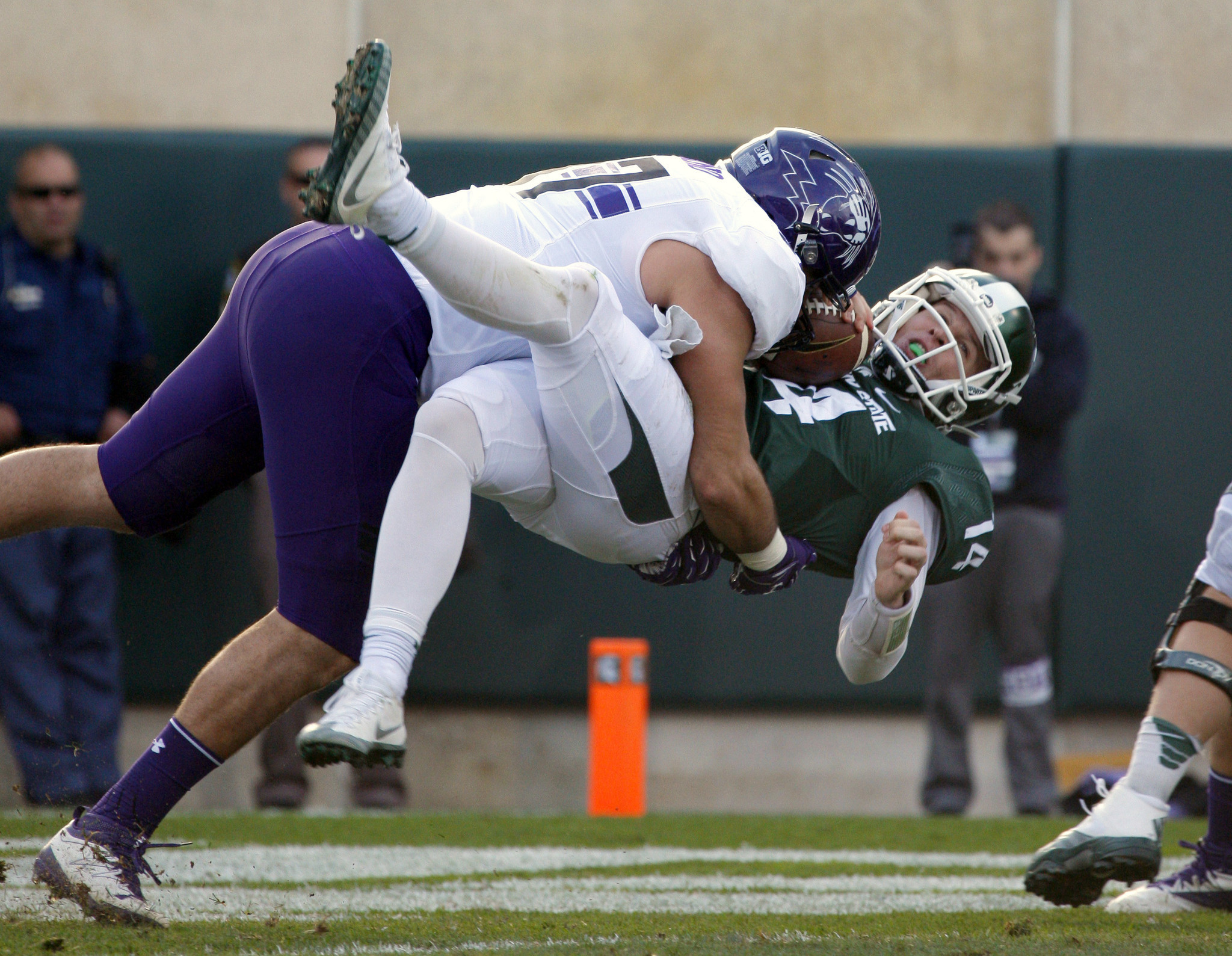 Joe Gaziano via Chicago Tribune[/caption] Kentucky has faced more athletic defenses than Northwestern. However, I’m not certain its faced a better coached or disciplined collection of defenders. Expect to see the Wildcat D play with extreme effort as it takes tremendous pride in swarming to the football and team tackling. Northwestern will be focused on stopping or slowing RB Benny Snell. This means that UK must find balance and a passing game if it intends on competing for the Music City trophy. Kentucky’s offensive possessions will be limited. It must improve its red-zone touchdown efficiency and 3rd down conversion ratio. I find it difficult to compare Northwestern to a defensive opponent that UK has faced in 2017. However, UK has been productive when facing 4-man fronts. It faced mostly 3-4 defenses in conference play. Much, much more to come on the Northwestern defense. Summary; it’s great vs. the run. Not so good vs. the pass but extremely well coached and disciplined. [mobile_ad]