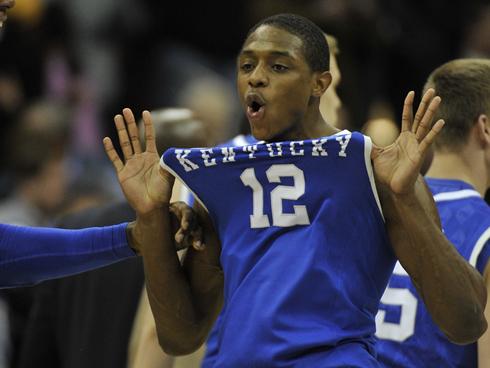 Don't forget to buy your Brandon Knight jerseys while you still can! Call me crazy, but overkill on Brandon Knight is fun.  After reading draft talk from sources everywhere and seeing the video of Brandon's excellent workout with Kings, you'd think I'd be tired of hearing about this kid.  But I'm not.  I mean... he took us to the Final Four, sang two game winners in one NCAA tournament, and got all A's.  He is too good to be true, sometimes, but he keeps on impressing.  The video earlier today showed his continuing development. This article further discusses Knight's pre-draft workout with the Kings, as well as his development throughout college. Of course, no one realistically sees Brandon dropping to the King's No. 7 pick, but entertaining the idea of Boogie and Tyreke joining forces with Knight is fun.  In fact, this article grabs a good quote from Brandon on how having several Calipari-coached guys around him would be good:

"I think it'd be kind of big, just the guys having the same mentality, having prepared the same way for this level," Knight said of the idea that three Calipari players could join forces in the pros. "I think it might lead to having good chemistry right off the bat."

Brandon goes on to discuss more important topics, like his ability to run a team and how that will effect his placement in the draft for team picking in the early lottery.  He also talks about how Cal developed his game while at UK this past season:

"He forced me to talk to guys," Knight said. "When I wasn't talking, he stopped practice and said, 'Brandon, you're letting the team down, you're not talking. You're being selfish.' He forced me to say certain things that I wouldn't say to guys before in high school. Through that, we kind of a built a trust with one another. He just basically built us into a family. We became a family first and then it became easy to lead guys who I trusted. "I think I grew a lot [at Kentucky]. In the beginning, I was making a lot of bad mistakes, lot of bad reads. And toward the end of the season, I was making most of the time the right play and the right decisions, so I think I grew a lot."