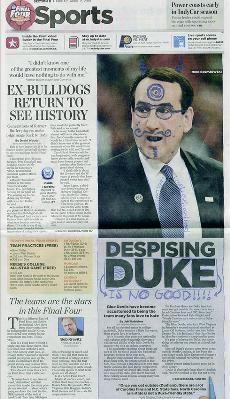 In Friday's early morning edition of the Indy Star, the above image could be seen. No that's not after print doodling, that's what was actually printed. We all know that UK fans are everywhere, but who knew they were also running the imaging department at a major Indianapolis newspaper? Coach K saw the image and was asked about what he thought and here's his response:

"I did see that, and first thing I thought was, 'that can't be.' How could a newspaper do that, I thought somebody doodled ..." "But it was kinda juvenile, not kind of, it was juvenile. And my seven grand kids didn't enjoy looking at it. It is what it is. It's very juvenile. We have great kids who go to school, they graduate. If we're going to be despised or hated by anyone because we go to school and we want to win, you know what? That's your problem. You have a problem. Because we're going to go to school and we're going to try to win. You don't like it? Keep drawing pictures ... just keep drawing pictures. Try to do them a little better than that, though."

Steve Wojehousskiqua also got a hold of the image and here's his response. The paper did end up crumbling under the pressure and met with Coach K and his assistants to issue an apology. Boo Hoo.