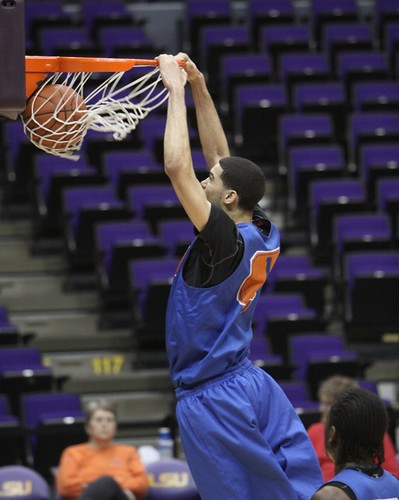 Eloy Vargas: "We've got a lot of guys who can score, so we don't really need (the centers) to be in the offense." That was the quote given to the Courier-Journal about the center duo of Josh Harrelson and Eloy Vargas, and it really struck me as an odd thing to say.  Not because it doesn't hold some truth.  Certainly there are at least 5 guys (Knight, Lamb, Jones, Miller, Liggins) who are bigger offensive threats than Jorts and Vargas.  But, the idea that the centers "don't need to be in the offense" seems a little odd for a contributor to say.  If Jared Polson says he is not part of the offense, that is understandable.  For a guy averaging 14 minutes per game, plus Harrelson's 24 minutes, that is alot of court time to not even considered yourself part of the offense.    Even if a guy is not a scoring threat on the offensive end of the floor doesn't mean he isn't part of the offense.  Otherwise, you are constantly playing 4 on 5.  Now, some can argue that is actually what Kentucky is actually doing.  And in Maui, many times the 5-spot was just standing on the baseline doing nothing or standing in the post and not getting a look.  But if the attitude of these guys is they are not part of the offense, that worries me. They still need to crash the boards hard, set strong screens, and be available for lay-ins when their defender leaves them.  That is considered part of the offense.  And if you remember, there were a couple times in Maui where both Harrelson and Vargas seemed unprepared to recieve a pass and lost the ball.  Could this attitude have played a role? So while we can all agree that our centers are not yet skilled enough to become consistent scoring threats, does this idea of "not being part of the offense" attitude scare you?  Or is this just how this team is going to be?