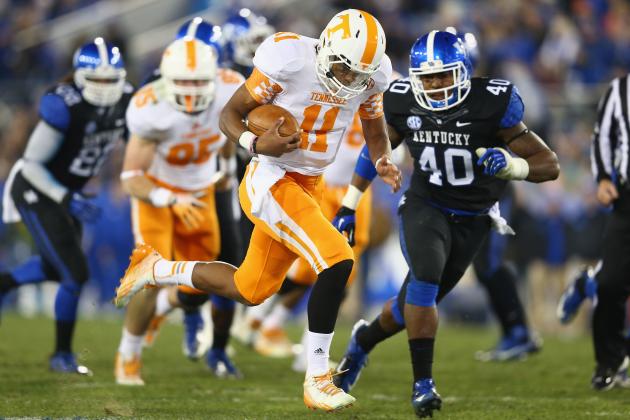 Over the past 31 years, Kentucky has knocked off Tennessee a total of one time. One. To say the Vols have had the Cats' number over the years would be an understatement. The series has just not been fun, to put it lightly. To start the year, Tennessee was viewed as a College Football Playoff contender, with many viewing the trio of Josh Dobbs, Jalen Hurd, and Alvin Kamara as three of the top playmakers in the nation. With factors of UT's ridiculous talent top-to-bottom, series history, and the game being held in Knoxville this season, the vast majority of Kentucky fans completely dismissed the game to start the year. Right now, however, the tables have turned ever-so-slightly. Star running back Alvin Kamara, star cornerback Cam Sutton, and star linebacker Jalen Reeves-Maybin have each been declared out for the season, three absolutely detrimental hits to the starting roster. Beyond the three team captains, starting defensive tackle Kahlil McKenzie and linebacker Quart’e Sapp are also out for the season, and at least 14 other players listed on the two-deep depth chart for UT are injured in some form or fashion. To make matters worse, starting defensive tackle Danny O'Brien was dismissed from the team last week, and the Vols are now down to just two healthy scholarship DT's heading into their bye week. Tennessee was so beat up against Alabama that they couldn't even dress an entire team of 70 scholarship players, and ended up losing five more guys as the game progressed. Their entire injury report following the game is... Something. [caption id="" align="alignnone" width="601"]

@JesseReSimonton[/caption] This is no injury bug for UT, this is an injury plague, and the collective health of the Volunteers doesn't seem to be improving anytime soon. Injuries aside, the Volunteers have been living on luck throughout the season, and have been right on the cusp of losing some atrocious ball games, including a 20-13 win in OT against Appalachian State and squeaking by Ohio 28-19. Their luck ran out two weeks ago, where they picked up their first loss of the season against Texas A&M in overtime. Last weekend, the Crimson Tide absolutely destroyed the Vols 49-10 in Knoxville, where Alabama was viewed as 5th grade bully on the playground, and Tennessee was the ant underneath the magnifying glass on a sunny day. It was a blood-letting, and an absolutely embarrassing performance at home for Tennessee. Kentucky, on the other hand, held Alabama (on the road, nonetheless) to their lowest point total of the season with 34 points, held them to their second lowest rushing total of the season (173 yards), and was considered the most "physical" team the Tide had gone up against in the eyes of the best defensive end in the nation, Jonathan Allen. The Wildcats then took care of Vanderbilt at home, winning 20-13 in a hard-fought battle through the trenches. Vandy had given up a combined 167 yards rushing against Florida and Georgia, yet UK managed to dominate 0n the ground, rushing for over 250 yards. Up until the last drive of the game, Kentucky's secondary had given up just 91 yards through the air, and the defense as a whole gave up just six points total. Vast improvements have been made on the defensive side of the ball, and Kentucky has a three-headed monster in the backfield that stacks up with damn-near anyone in the SEC. Kentucky's rush defense has given up just two rushes of 20-yards or more, tied for first in the SEC with LSU, and the pressure coming from the front seven has been extremely impressive. Jordan Jones has far-and-away separated himself as the most valuable player on defense, and outside rushers Josh Allen and Denzil Ware have done their part to keep the opposing QB off balance and uncomfortable in the pocket.  In the secondary, Mike Edwards and Derrick Baity have been living up to their pre-season hype, and Chris Westry has been making strides these last few weeks. Since Mark Stoops has taken over the unit, the defense has given up just 8.1 points per half in the past seven halves of play, compared to roughly 25 points per half in the first two-and-a-half games. On offense, this may be one of the most impressive stable of running backs in recent memory for UK football. Boom Williams and Benny Snell have combined for 881 yards on the ground through six games, the most by a pair of UK running backs since Tony Dixon and Rafael little back in 2007. Add in Jojo Kemp's recent spark in the WildKemp, and you have to believe rushing records are going to be shattered with six more games left on the table. If Stephen Johnson can get his throwing woes worked out so UK's offense isn't so one-dimensional (he reportedly had a great week of practice), this offense can put some points on the board. The Wildcats are improving each time they step on the field, while the Volunteers are crumbling, and it's impossible to not take notice. A lot of Kentucky's performance against Tennessee depends on these next few weeks. If the Wildcats can build some major momentum and grab a win in two of the next three games, the hype alone may be enough to make it a ball game on November 12th. Add in injury issues and recent lackadaisical play, all bets are off the table. History is certainly not on Kentucky's side, but if there is ever a time for Stoops to beat the Vols on the road, it's now.   Can UK pull off a win in Knoxville?   @JackPilgrimKSR