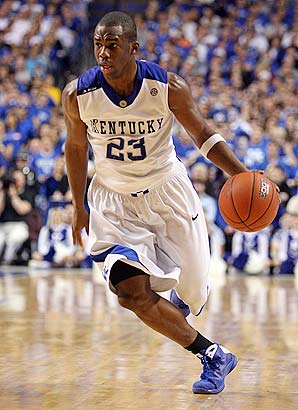 I have been called up from the KSR D-League for a 10-day contract and I am looking forward to making the most of the oppotunity. I am a bit envious of Matt and the gang as they travel the college basketball circuit, but guest writing on KSR is a nice consolation prize! In all seriousness, it is an honor to be here and while I have obviously thanked Matt privately, I would like to thank him publicly for the opportunity to spread some UK sports love to such an enormous gathering of Big Blue fans. For those that do not know me, I own and operate AllKYHoops.com, which is basically exactly as it sounds - I cover, or at least attempt to cover, all the basketball in the Bluegrass State. My site is built solely on my passion for the game of basketball and while it requires tremendous effort to keep it running properly, is it really considered work if one is doing what he/she loves? One final note for those that may have loyalty concerns: make NO mistake, I bleed True Blue through and through. Go Cats! Now, for some Big Blue news: - As Matt mentioned earlier, the Milwaukee Bucks have agreed to trade former Cat Jodie Meeks to the Philadelphia 76ers as part of a four-player deal. ESPN's Chad Ford reports that the Bucks will send Meeks and Francisco Elson to the 76ers in exchange for Royal Ivey, Primoz Brezec and a second-round draft pick. - Former Wildcat heroes Jeff Sheppard and Wayne Turner will be signing autographs Saturday at the Verizon Wireless Store (1895 Vendor Way) in Lexington. Those who attend will also have a chance to win VIP tickets to a basketball clinic at Rupp Arena with ex-Cat Richie Farmer. The clinic will include a tour of the UK locker room, a practice jersey and personal instruction from the Clay County legend himself. For more details, visit the event's Facebook page. - Here is an update on Kevin Massey, the young Indianapolis man that has been stricken with a life-threatening brain tumor. John Calipari actually visited Massey in the hospital over a week ago. Since Calipari's visit and a report by a Lexington news station, Massey has received messages of support from all around the nation. This story continues to paint a much different image of John Calipari than his detractors would want you to see. - We are leading up to the Vanderbilt game Saturday in Nashville, which has historically given UK fans their fair share of heartache throughout the years. The game will be played in the friendly confines of Memorial Gym, which is easily my least likeable gym in the Southeastern Conference. I will take an in-depth look at this later tonight. - As KSR's Christopher Johns wrote yesterday, tonight is the UK Hoops Pink Zone event as the No. 16 Kentucky women host Florida. This is a great event for cancer awareness and did I mention that the UK Hoops team is 21-4 (9-3 SEC) on the season and currently reanked No. 16 in the nation? - Later today, we will take a closer look at John Wall vs. Evan Turner for player of the year in college basketball and the aforementioned toilet bowl known as Memorial Gym. You can follow me on Twitter for all updates and breaking news.