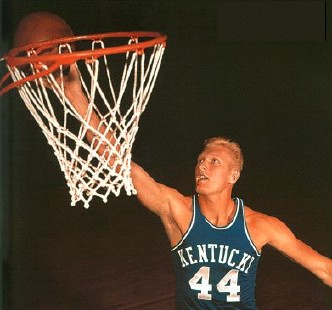 [/caption] Not only do we have our matchup with the Hoots of Florida Atlantic, but December 27 has historically been a special day for standout performances by Kentucky players over the years. (Or at least that's what I'm going to tell you in this post.) Mark Pope and Andre Riddick posted matching double-doubles on this day in 1994. Names like Dan Issel and Sam Bowie also recorded double-doubles on this day, claimed as a birthday by Louis Pasteur. The great Cotton Nash even recorded two separate double-doubles on this surprisingly special date. Finally. the last Wildcat triple-double, achieved by Chris "Hey you found my envelope. Thanks buddy, that's big of you. No, I don't know what that money's all about. Seriously" Mills against the Governors of Austin Peay in 1988.  What does all this mean? Pretty much bupkus, I think. (Thanks anyway, Jon Scott.) Actually, it means that we might be in store for a special performance from one of our Cats. I'm guessing it'll be in the form of a Matt Scherbenske quadruple-double. At least that's what the smart money is on. Seriously, though, I think it means that now before games I'm finding random stuff to get excited about instead of random stuff to get frustrated about. That's a good sign. Means we're starting to come around. Yes sir, it feels pretty good to be a Wildcat fan these days, and after a win today it will feel even better. Still not as good as it feels to be a gangster, though. Because damn it feels good to be a gangster: I'll be along in a bit with a game thread for you all to sink your cyber teeth into. Until then...