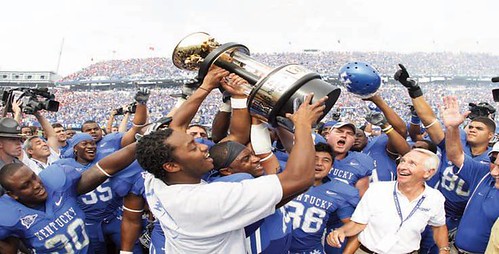 What more can be said? You were around for the build-up all summer. You were around for Louisville Hate Day. You have been reading and watching everything you can get your hands on and now the big moment is almost here. What more can a lowly blogger like myself possibly do to preview this game? Not a whole lot, but I'll try by tossing you some relevant facts, trivia, and information just in case you missed it. First and foremost, how can you see/hear the game? Other than hauling your fanny down to Pizza stadium, here are the available options: Television: ABC with play-by-play analyst Dave LaMont and color man JC Pearson. Radio: The Big Blue Network with play-by-play analyst Tom Leach and color man Jeff Piecoro. Satellite Radio: Channel 201 - XM, Channel 218 - Sirius but you must have the “Best of XM” package. Internet: www.UKathletics.com with live audio and stats for free. Second, how about some trivia about the series? - This will be the 23rd time in these programs have met on the gridiron. - UK leads the overall series 13-9, including a 5-3 mark when the game is played in Louisville. - Streak: Win - UK 3 straight. - UK’s last win in Louisville was in 2008 by a score of 27-2. - The Cats are 50-29-5 vs. members in the current alignment of the BIG EAST Conference. - Overtime is bleak with UK being 0-1 vs. UofL but that includes a freaky thunderstorm delayed game. - Saturday’s game marks just the third time in school history the Cats have played on Sept. 4 where UK has a 1-2 all-time record. - The Wildcats only win on Sept. 4 came in 1993 vs. Kent and UK has never played a road game on this date until today. Third, some player milestones to watch: - Derrick Locke (1,731 career rushing yards) - Needs 27 yards to tie Anthony White for ninth place on the UK career rushing list, 33 yards to tie Derrick Ramsey for eighth place and 38 yards to tie Marc Logan for seventh place. Wow. Just. . .wow. - Randall Cobb (24 career touchdowns) - Needs three TDs to tie Rodger Bird, George Adams and Moe Williams for second place on the UK career list. - Mike Hartline (2,502 career passing yards) - Needs 257 yards to tie Jerry Woolum for 10th place on the UK career list. Fourth, fun with phonics for your favorite footballers (see what I did there?): - Chris Agomuo: ah-GUM-o - Tyler Brause: BROW-zee - Jacob Dufrene: du-FRANE (If you aren't hearing Red talk about crawling through 500 yards of smelling foulness in your head, you lie). - Teven Eatmon-Nared: Teven rhymes with “seven”; EET-mon NAR-id - Qua Huzzie: KWAY HUZ-ee - Jake Lanefski: lan-EF-skee - Brice Laughlin: LOCK-lin (as in McClain) - Greg Meisner: MICE-ner - Martavius Neloms: mar-TAY-vee-us NELL-ums - Jarrell Priester: PREES-ter (Prees-ter? I hardly know her! *rim shot*) - Ryan Tydlacka: tid-LOTCH-ka (Tink you veddy much) - Collins Ukwu: OOK-woo (WWWWOOOOOOOO!!!!!) Fifth, let's end it with a salute to Joker from one of UK's finest: “I just think it was a great move by the university and a great move for the program. Coach Joker was instrumental in my career. He knows how to go out and get players, and he recognizes how to get the best out of the players he brings in. You know the program will be in good hands because he care so much about Kentucky football.” — All-SEC tight end Jacob Tamme. Damn right. Go Cats. Beat Louisville. See you people on the other side.