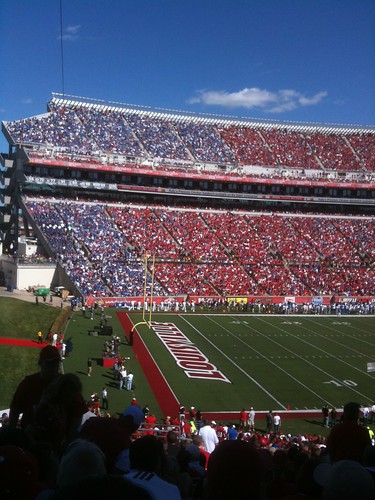 One blogger's view of the game. Blue represents. Joy! Football season is here and your Kentucky Wildcats are rolling! The Cats marched into Pizza Stadium and ruined the debut of both the remodeling effort and the Charlie Strong era. The Red fans were out in force and the scene was electric, but the boys in Blue met the challenge head on and piled up enough points to prevent the Cardinals and their second half adjustments from winning the game. It is a heady day for UK fans everywhere, so take some time to bask in the absolute elation that comes with a win over the 'ville. Let's get to some highlights of the game: -THE RECEIVERS: For my money, the biggest question mark coming into the game wasn't how well Mike Hartline would play, but if the receiving corps would be improved enough to allow for a more complete offense. La'Rod King, Chris Matthews, and Matt Roark all had significant contributions and big plays to join The Legend as legitimate threats in the passing game. In addition, tight end Jordan Aumiller (From? Danville) caught a pass from Cobb late in the game for 19 yards, a first down, and a nail in the coffin for any hopes of a Louisville comeback. -THE QUARTERBACK: How 'bout that Mike Hartline? As Matt said on the radio, if you look at this guy and still hate him after he has essentially taken you to two bowl games and beaten Louisville 3 straight years, then you might never be satisfied with anything. He isn't the most talented QB to ever don a blue jersey, but he played a smart, effective game and was clearly the best field general in the game. Mike was 17/26 and rolled up 217 yards of offense and had a first half that was as exciting as we have seen since Andre Woodson prowled the sidelines. If only that one pass to Cobb didn't glance off The Legend's fingertips, this game would have been well out of Louisville's reach and probably reaches blowout status. Overall, a great game out of Hartline and the type of performance that was needed to set the tone for the season. -THE LEGEND: Cobb is awesome. He was all over the field, throwing passes, running out of the Wildcat formation, and catching passes that even made Louisville fans suck in their breath. His one-handed, left-handed snag of a Mike Hartline pass was simply phenomenal. Of course he followed it up with an end around that allowed him to cruise 51 yards for UK's third TD of the game. -DERRICK LOCKE: Speed kills and Locke's speed was deadly for Louisville. Few things are more satisfying than seeing a speedster like Lock in full blast toward the end zone then pulling up and gliding in because he is that much faster than anyone on the field. Locke scored two touchdowns and racked up 104 yards on 23 carries. Backup Donald Russell also played well and I will always have a special place in my heart for Moncell Allen (Turtle has to play the John Conner role this year and those are mighty big shoes to fill), but Derrick Locke is the engine that makes this team go and he proved it today. -THE KICKERS: Um. Punting and kickoff were awesome. The field goal and PAT's? Oy! Not so much. I agree with a caller into Matt's radio show and think the UK FG kicking position might be cursed. There is going to be a lot of work to do over the next 2 weeks to get ready for Florida. UK can simply not leave points on the field by missing easy FGs if they want to achieve their goal of taking the program to the next level. It is that simple. -THE DEFENSE: Overall, not a bad effort out of a unit that had a ton of key losses from last season. There were multiple stands where Louisville looked to be taking the ball in for 7 and they were either held to a FG or pushed back out of scoring range. The game became a chess match and their ability to stop a TD late in the game increased UK's odds of winning greatly and allowed for the offense to operate more comfortably to put the game out of reach. The two turn-overs were huge and were opportune plays instigated by a swarming D. Like the kicking game, there are some aspects that need work, however. Silly penalties kept the Cardinals in this game, but such mechanics ought to be expected during the first game of the season. -HALF TIME ADJUSTMENTS: While UK played it safe, the Cardinals won the battle in the second half. More than one UK fan got anxious when Bilal Powell opened the second half on an absolute tear. He had 33 yards on 2 plays on their first series then uncorked an 80 yard dash to the endzone to send Papa John's Stadium into a tizzy. I'll give Strong the upper hand in adjustments at halftime as his squad looked sharper, more open, and more motivated in the last two quarters of the ball game. That Froman kid isn't half bad and he showed it in the second half. All in all, a great game for the Wildcats. It was an absolute beautious day made that much better by putting the 'L' in Louisville. I hope you had fun watching it. I know I did. Go Cats.