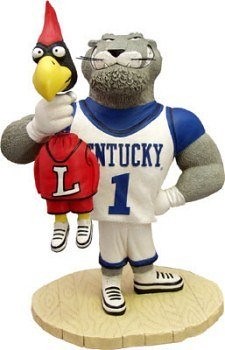 Awwww yeah. It's here! It's here! Football has finally begun and the big day is here! Below are some links to get you started on Christmas in September: -Charlie Strong thinks Kentucky has a solid football team. He is also concerned about Cobb. Sun: hot. Sky: blue. -Earl Cox thinks this might be the biggest UK v UofL game ever. I'm not sure that is the case this year, but I like his enthusiasm. Also? Cox's profile pick makes him look like he buys a blue hat every time he leaves work to take home to the wife. -The Miami Herald has an AP story about Cobb embracing his role as the face of Kentucky football. Beisner's wife is also embracing the role due to those dreamy eyes. -Keith Taylor uses Larry Vaught's soapbox to talk about Ricky Lumpkin's decision to spurn the Cards for the Cats. For Lumpkin, it is a pride thing to go 4-0 against the Cards. Guys like him psych me up so much it makes me want to run through a brick wall. Love it. -On a more serious but encouraging note, Tony Barnhart points out that when Joker takes on Charlie, it will be the first time two black head coaches have squared off in a season opener in D-1 history. Something to be proud of for both schools and both conferences. -WKYT is reporting that the UK ROTC is delivering the game ball from Lexington to Louisville. . . on foot. One of my claims to fame is that I once walked from UK campus to Wilmore and it isn't a journey I ever care to repeat. No, alcohol wasn't involved and it isn't nearly as cool as the recruits for UK double timing the game ball down US 60. God speed, gentlemen. I'll be around all day as we preview and recap the BIG GAME. Go Cats.