Slight momentum. Stop. Slight momentum. Stop. Slight momentum. Stop.  That has been the story of Kentucky's 2012-2013 season. Kentucky's longest winning streak of the season was halted after just 5 games. Some have put it in different terms, yet essentially saying the same thing: "One step forward, two steps back." This young Kentucky team could have used a lot of things this season, but even just one confidence building stretch of games might have been huge mentally for them. Unfortunately, that just hasn't happened yet and not much time remains for it to still happen. Even two years ago, with an up-and-down season filled with major breaks in momentum-- Kentucky was able to make one strong momentum-building run at the right time. Kentucky reeled off 3 wins in a row, coupled with 3 more SEC tournament wins on the way to the eventual SEC tournament title. Those 6 games and that stretch propelled Kentucky into the NCAA tournament with a newfound sense of confidence. Last year's Kentucky team rarely lost period, but the national champions also had a knack for grabbing huge momentum swings within individual games. That team was capable of a 12-15 point run at almost any point in time. You always knew it was coming, and when it happened-- any prayer the other team had of winning was going to quickly be erased. This year's Kentucky team has had trouble grabbing momentum in individual games as well, often failing to capitalize on 8-10 point leads. How many times have you said to yourself while watching a game, "If we could have just extended that lead to 15 points, the game would have been over?" The inability to extend the lead and grab the momentum has sometimes resulted in losses, but at the very least has resulted in narrow margins of victory in games that could have been won midway though the second half.  By my count, Kentucky has had 5 big momentum killing moments throughout the season. Although Kentucky has had more than just 5 losses this season, the timing of these 5 losses stopped Kentucky's forward progress dead in its tracks, and hurt Kentucky's perception nationally and with the selection committee. If Kentucky could have managed to avoid any of these 5 major momentum-killers, the Cats might have been able to gain some semblance of confidence as a unit-- something the team has appeared to lack all season long. 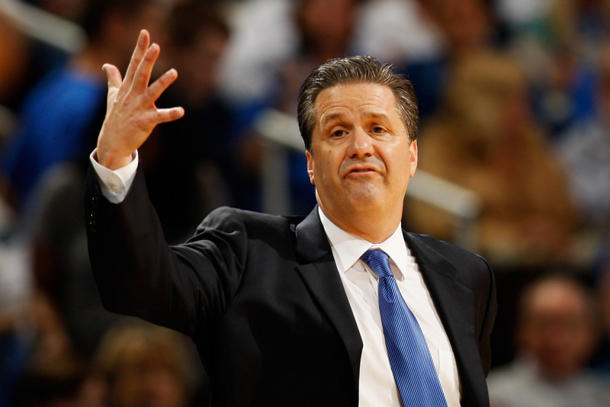 (How many?) 1. The Notre Dame/Baylor combination of losses- Between the feel-good performance against Maryland by Jarrod Polson and an impressive outing against a much more experienced Duke team (even though it resulted in a narrow loss), Kentucky was showing some serious promise early in the season. The #3 ranking was clearly too high, but at the time Kentucky looked like a young team that would only get better as the season went on. Then we saw how Kentucky couldn't muster much effort when punched in the mouth on the road against a veteran Notre Dame squad. Kentucky showed very little signs of life in a game that dragged on and on and on. The loss wasn't a complete momentum-killer though, because a young team is expected to struggle on the road, and Notre Dame is excellent at home. When Kentucky turned around just a few days later and lost its first home game in the Calipari era to an average-at-best Baylor squad, eyebrows started to raise. Kentucky was moved off the national radar and placed in a "okay, now you're going to have to really prove yourself before you jump back in the picture" category. 2. Texas A&M loss at home- After the black-eye taken during the ND/Baylor stretch, Kentucky had a string of relatively easy games followed by a "good loss" to Louisville. It's never a good time to lose to Louisville, but considering the Cards were ranked #4 in the country and were considered a serious title contender, and the game was AT Louisville-- Kentucky put up a stand-up effort. Ryan Harrow even made a statement in his first great game following his "break" from the team. With Harrow's strong return, and seeing that Kentucky could now hang with 2 of the best teams in the country (Duke and Louisville), things weren't all bad. Then Texas A&M happened. A lowly Texas A&M squad came into Rupp Arena and one player single-handedly dismantled the Cats. Any positive momentum gained from a close loss to Louisville was lost and the magic of Kentucky's dominance at home was lost as well. 3. Alabama loss- Following the embarrassing loss to Texas A&M at home, Kentucky put together two pretty strong performances against both Tennessee and Auburn. Kentucky finally hung a 20+ point win on someone, something they had yet to prove they could do in conference play. If you take out the Alabama loss, Kentucky could have had an 8-game winning streak when you look at the next stretch of games. That would have been the longest winning streak of the season for the Cats. 4. Florida loss/Loss of Nerlens/Tennessee meltdown- We all know why this one hurt so bad. Not only did Florida end Kentucky's 5-game winning streak, which included a win on the road at 16th ranked Ole Miss...but we all know that Kentucky lost much more than a basketball game that night in Gainesville. Kentucky lost its bigger fighter, and one of its best leaders in Nerlens Noel. A Kentucky team already struggling to find a rhythm and a team identity was given a huge road block at a crucial point in the season. When many teams are usually starting to come into their own at the 3/4 point in the season, Kentucky was having to go back to the drawing boards without arguably its best player. Then Tennessee happened. Kentucky took the floor with all eyes watching to see how they could respond without Nerlens Noel. Instead of fighting back, Kentucky ran into a Tennessee freight train and took one of the worst losses in recent memory. Everyone was already skeptical of Kentucky, and the loss did nothing to prove anyone wrong. Mentally, the team probably had to wonder about its fate (at least privately) and future post-Nerlens. 5. Arkansas loss- Kentucky fought back after a brutal and embarrassing drubbing against Tennessee to beat Vanderbilt at home in a must-win game. Then Kentucky responded in a big way in front of a national audience by besting a good Missouri team in an overtime thriller on Game Day. Momentum was clearly back on Kentucky's side, with many people both locally and nationally starting to see signs of life (and NCAA tournament life) with this Kentucky team. The team itself began to show an ounce of confidence too when talking about the win and each other. A breeze of positivity swept through the bluegrass for the first time since before Nerlens Noel went down. Kentucky even added to the Missouri win with a convincing 30-point beat down of Mississippi State. Then Arkansas happened. Even though the Razorbacks are nearly unbeatable at home, Kentucky lost the momentum gained over the last week and a half. Kentucky didn't necessarily take a huge fall with the loss, but the Cats once again were halted. Kentucky went from being slightly ahead of the pack in the "bubble race" to right back in the thick of things.   I know, I know. You've heard it a thousand times before. But this Kentucky team really is down to its final shot to grab momentum. Kentucky can either grab momentum by going 2-0 in the final 2 games of the season, or by making a run to the SEC championship game. If Kentucky can somehow manage to put both of those 2 things together, the Cats could grab some serious momentum. Kentucky will do 1 of 3 things in the next week: Fail to make the tournament, sneak its way into the tournament or march into the tournament with some momentum. At least one Kentucky player still thinks the 3rd option is possible. Jon Hood told the media today that there are always a few teams that make a late season  "Cinderella" type of run. "Any team can do it, why not UK?"