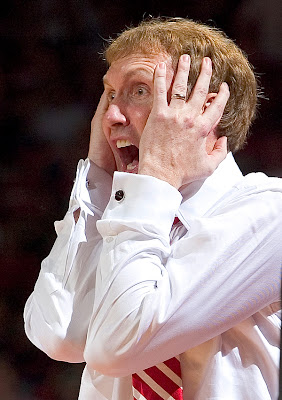 OMG!!!  I'm fourth?!?!!? Hey, remember at the beginning of the season when the battle cry of the miserable fans was "We shoulda got Pelphrey, dangit"? You remember. It was back before they were screamin' "Gillispie needs to stop bein' so galldern stubborn" and "We won't even make the daggum NIT". It seems like it was ages ago since Arkansas has followed up their victories over Oklahoma and Texas with a less-then-stellar 1-8 record in conference play, but it seems that at least one person is holding on to the high regard for Coach Pelphrey. A guy over at Arkansas' student newspaper ranked the SEC basketball coaches and put Pelphrey at 4th and Clyde at 7th.  Hmmm.   Here is what he said about each coach (spelling doesn't count here): 4. John Pelphrey (Arkansas) Pelphrey has accomplished more in his first two seasons at Arkansas than many coaches accomplish in a career. He's already won an NCAA Tournament game, been to the SEC Championship game and beaten two top-10 teams. This season is the first of the "rebuilding project" (although you'll never hear Pelphrey call it that) and the young Hogs have played well at times, and not so well at other times. That's to be expected. 7. Billy Gillespie (Kentucky) There isn't a coach in the nation in a less enviable situation than Gillespie. When he abandoned Texas A&M for Kentucky, I'm not sure Gillespie knew exactly what he was getting himself into. Now he knows, and he's doing OK for himself. He's not winning national championships every season like Kentucky fans think their program should, but he's slowly rebuilding the Wildcats. These things take time. And, for giggles, here is the full list: 1. Billy Donovan (Florida) 2. Bruce Pearl (Tennessee) 3. Andy Kennedy (Ole Miss) 4. John Pelphrey (Arkansas) 5. Darrin Horn (South Carolina) 6. Trent Johnson (LSU) 7. Billy Gillespie (Kentucky) 8. Kevin Stallings (Vanderbilt) 9. Rick Stansbury (Mississippi State) 10. Jeff Lebo (Auburn) 11. Philip Pearson (Alabama), Pete Herrmann (Georgia) Process this information however you'd like.