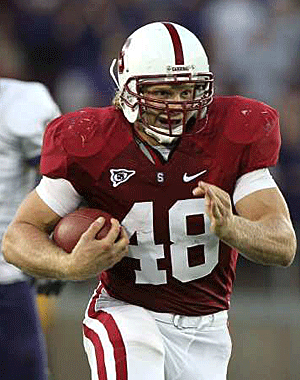 Who is this guy above?  I would guess that barely a soul outside of the state California would know.  But one guy in this state who does know is Billy Reed.  Why would Billy know who this player is?  Because the player above, Stanford linebacker Owen Marecic, is who Reed voted 1st ON HIS HEISMAN BALLOT!!! I heard this explanation of why Marecic got his vote on 790AM here in Louisville earlier this week.  And it basically went like this (not an exact quote): "He plays on both sides of the ball, and other coaches say he sure can tackle" (I would love to know which coaches Reed has talked to.  Because I highly doubt him and Lane Kiffin, Mike Stoops, Jeff Tedford, or the other 7 Pac-10 coaches have had lengthy discussions about Marecic, but I digress.) Now, how good of a tackler is Marecic?  So good, he recorded all of 45 tackles this season.  Also known as 85 tackles less than Danny Trevathan.  Also known as not in the Top 200 of tacklers in all of college football.  The NCAA only gave me the Top 200 tacklers, so for all I know he might not be in the Top 500.  But, Marecic sure did make those 45 tackles count.  Now, what about the other side of the ball?  Marecic must have made an impact there, right?  Well, Heisman Trophy deserving Marecic carried the ball 20 times for 42 yards this season, with 4 touchdowns.  Moncell Allen had 39 yards this season as fullback.  He must have been given consideration too, right?  All of this is ridiculous for those points alone.  But, lucky for us, the absurdity of this situation doesn't stop there.  Because a question that had to run through your mind is: WHERE IS CAM NEWTON? With all of the allegations surrounding Newton, I can borderline understand a voter choosing to not vote for what is clearly the best player in college football this year.  I think it's dumb for a voter to ride a moral high horse when their job is to simply vote for the MVP of college football, but that is their prerogative.  The NCAA declared him eligible, that should be good enough for the voters.  But, as Reed said in his interview, he found it hard to believe that Newton did not know about the shopping his father was doing for his services.  So, Reed did not vote for him.  And then Reed threw this little gem in there: "I voted for Newton 3rd, reluctantly" ARE YOU SERIOUS!!!  If you are willing to actually put him on your ballot, then how can you not put him first????  If you think Newton is a cheater, then keep him off the ballot completely.  Don't take the gutless route, and put him on the ballot so you can cover your rear when he wins the award in a landslide.  So you don't look like the goofball who only did something (not vote for Newton) just to get attention.  If Reed really thinks Newton was a cheater, then why is he on the ballot at all?  And if you can muster enough "courage" to put him on your ballot, how can you put an AVERAGE LINEBACKER FROM STANFORD ahead of him?  This vote was cowardly.  Plain and simple.  It was vote where Reed can both play to high morals game, voting a pointless player from Stanford first because of his toughness and playing on both sides of ball, while also putting the obvious choice on the ballot so that when he wins, you can say you had him on your ballot too.  Embarrassing.