Michael Reaves | Getty Images[/caption] One of the greatest to ever train thoroughbreds now has to explain why two of his top three-year-olds failed a drug test this spring on Arkansas Derby Day at Oaklawn Park. Kentucky Derby frontrunner Charlatan and Oaks-contending filly Gamine each failed post-race drug tests after securing wins at Oaklawn. Contested by Baffert's stable, Monday evening the results from a split-sample test revealed each horse had in fact failed after traces of lidocaine were discovered. Lidocaine is not a steroid. It's a numbing agent you've probably used before to help with pain. Horses are allowed to use it for therapeutic reasons if the drug is administered correctly. On race days 20 picograms (a.k.a. a trillionth of one gram) of lidocaine are permissible. Gamine tested at 185 picograms and Charlatan at 46 picograms. Baffert's stable is still contesting the findings, stating through an attorney that each horse was "unknowingly and innocently exposed to lidocaine" by an employee who was wearing a Salonpas patch for back pain. "The employee previously broke his pelvis and had been suffering from back pain over the two days leading up to May 2," said Baffert's attorney. "As a result, he wore a Salonpas patch on his back that he personally applied. That brand of patch contains small amounts of lidocaine. It is believed that lidocaine from that patch was innocently transferred from the employee's hands to the horses through the application of tongue ties by the employee that was handling both horses leading up to May 2." Is this explanation possible? Certainly, especially when you consider just how small of an amount it takes to fail the test. It also feels like the kind of wild excuse you'd make up to get out of trouble with your parents or a teacher as a teenager. They'll never going to believe that the dog ate your homework, but this excuse makes enough sense that it just might work. Charlatan won the Arkansas Derby but an ankle injury will sideline him for the Running of the Roses in September. After winning the allowance race at Oaklawn, Gamine won the Grade I Acorn Stakes at Belmont Park in record time, defeating her opponents by 18 3/4 lengths. The filly will be the Kentucky Oaks favorite if Baffert does not decide to give her a ride in the Derby. Read the full statement from Baffert's attorney below. 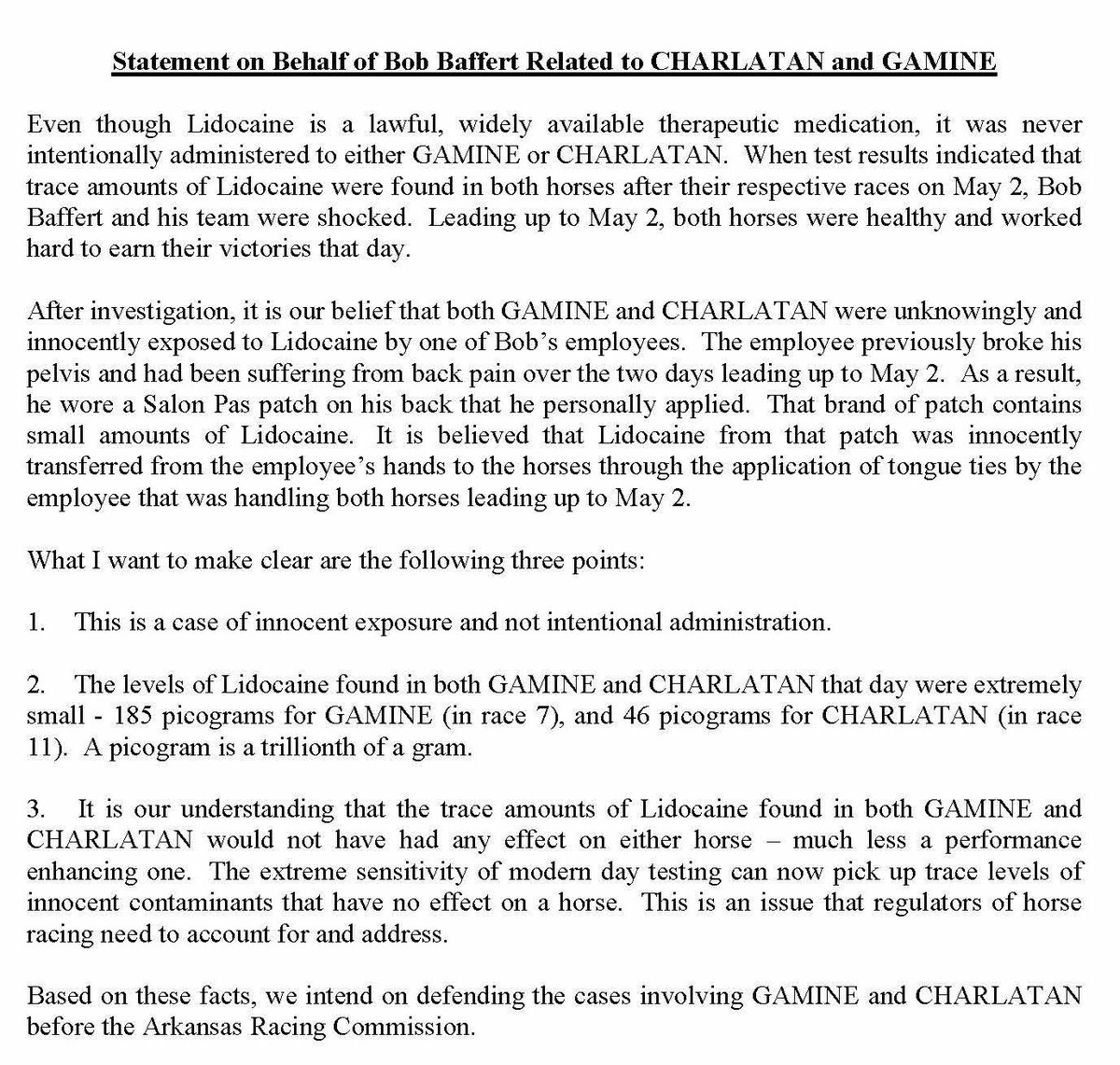