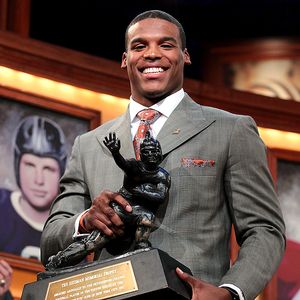 Last night in the BCS Tostitos National Tortilla Championship Fiesta Bowl Title Game (presented by University of Phoenix), Brent Musberger and Kirk Herbstreit were saddled with the unenviable task of explaining the Cam Newton decision by the NCAA–between in-game Directv spots, of course. Apparently ESPN expected millions of viewers from Tunisia whose only contact with the Newton decision came from Bleacher Report slideshows, so they left it to Musberger to give us the quick and dirty. Instead of glossing over the detestable events of yore, peppering explanations with “mistake” or “reckless,” Musberger openly cooed about Cecil Newton’s bravery in the face of adversity and how he’s some sort of hero or something. Which, for chrissakes, doesn’t make a lick of sense and, frankly, is sickening and insulting.

Now, I don’t necessarily believe that Cam Newton should have been suspended or reprimanded or whatever. However, on college football’s biggest stage, Musberger felt the need to add validity to the Newton situation so that we all knew that everything was on the up and up. Whether Musberger was directed by the NCAA, ESPN, or he took this upon himself is irrelevant. His opus simply proves that the NCAA is the supreme being and their decisions are not only final, but ones that the public are expected to believe to be right and just.

I think you can see where this is going.

Obviously I have a major bias with regards to the Enes Kanter decision by the NCAA. But, given the facts of both cases, they seem fairly similar (though Newton’s situation is far more nefarious than Kanter’s seems). Still, the refrain from the national media is consistent: Sorry, Cal. He was a pro. (You do have to give Dick Vitale credit, in this regard. Typically a bloviating–and entertaining!–bag of bombast, Vitale made a statement during the Texas-UConn game about the situation and, in so many words, unveiled the NCAA for what they were: A bunch of old men with a hard-on to tell Calipari to get bent.)

But, fine, the Kanter decision is what it is. It’s frustrating, though, to hear NCAA brass and media members alike glibly dismiss the case as some wacky risk Calipari took in the face of all that is sacred in collegiate athletics. I get it. He got paid “above and beyond” prior to enrolling in school so he’s not allowed to play. Hey, rules are rules. But understand this decision runs counter to Newton’s–and logic–so you sound foolish defending Newton while denouncing Kanter.

It seems, at least to me, that implicitly telling every AAU coach, parent, cousin, friend, friend’s dad, grandparent, teacher, advisor, scoreboard operator, and neighbor that, hey, shop your kid around. Just keep it quiet. And for someone as good as Cam Newton, you can get some pretty good scratch.

So, yes, great work, Cam. You are very good at football. But forgive me for demonizing your father rather than vaulting him to some pedestal of mental fortitude and morality because Brent Musberger wants me to and the NCAA says it’s OK.