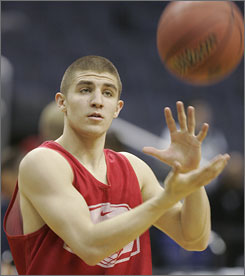 This guy is why I hate Georgia! As if ESPN didn't realize that Who's Next was the worst idea in the history of television, they are gonna start another lovely daily segment on Sportscenter called "The Mt. Rushmore of Sports".  If I read the press release correctly, they are going to pick the 4 faces for each of the 50 states.  But, just for argument's sake, here would be my 4 faces: Muhammed Ali: no explination needed Adolph Rupp: the biggest basketball state and it's most notable coach Denny Crum: suck it up Cats fans, he had quite the career Wes Unseld: still the only player to win NBA Rookie of the Year and MVP in the same season Yes, I know there are two Cards on that list.  But I am sorry, no former Cats players made enough of a pro impact to get in over Unseld.  I think the other 3 are mortal locks.  If you have someone better than Unseld though, let me have it in the comments sections.  Onto some links: 1. The glowing articles continue to come in for Jodie Meeks. This one is from the Courier-Journal, and talks about the historical importance, Jodie's development during his time at UK, and his NBA potential.  There is also this column by Rick Bozich, who talked to Dan Issel and conveys how happy Issel is that Meeks was the one to break his record.  2. I don't hate the Herald-Leader as much as most of you, but they put a ridiculous article up yesterday that talks about Patterson being OK with his 2-game dip in production, as opposed to talking about Meeks.  I think they may be forcing a story there. 3. How bit this interesting bit of news: Former UL head coach John L. Smith (2-2 against the Cats) will accept a position today on the defensive staff of Bobby Petrino (4-1 against the Cats) at Arkansas.  Ron Cooper (2-1 against the Cats) was reportedly not interested.  All I can say is PLEASE DONT TAKE KRAGTHORPE (0-2 against the Cats)!!!     4. A website called This is God Given is looking at the 10 most annoying things in sports.  Some are questionable, but the one that is not is this: Bill Raftery not calling the Final Four.  I love him like Dick Vitale loves his own voice.  He is not only having fun, but is accurate (here's talking to you Billy Packer) and on top of his info. 5. So, I guess I should mark snowboarding off the list of things I want to do.  OUCH!! 6. I really have no idea why this is funny to me but I laughed pretty hard at a couple points.  One: why is Kobe riding a horse in the beginning.  Two: When they twirl the kid's broken ankle.