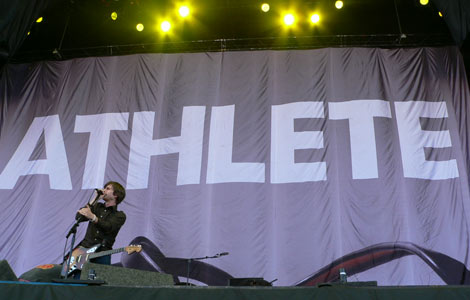 It's Thursday, which means I am off dealing crack again this morning.  So, with the Olympics winding down, and the discussion being raised "Is Michael Phelps the greatest ATHLETE ever", I instead pose a different question to you, wonderfully crazy KSR readers.  What sport requires the most athleticism?  Before I get into my list, here are the qualities that go into being a great athlete: -Durability -Endurance -Hand Eye/Foot Eye Coordination -Speed and Strength -Intelligence (yes thats part of it) -Intangibles (anything else you want to add or doesnt have a name) Alright, so I put as many sports (major and some minor) into the list as I could, but obviously I cant put everything.  Notable ommisions: Bowling, Running, Jockey, Poker, Rythmic Gymnastics, Equestrian, Syncronized Diving. So, without any more stalling and with no ado: (1) Football: the most contact sport in this list yet I always feel like there are more injuries in baseball than football, obviously speed and strength are a MUST (unless kicker or punter), hand eye coordination is key in every position, and to remember the many hundreds of plays those guys do shows a great intelligence.  And lets be honest, there has to be a little toughness in you to just want to get hit 75 or more times in a game.  (2) Basketball: Probably a greater endurance sport than football due to lesser stops in play, but also less contact, speed and strength are bonus but not a complete must, and hand eye is not as important either (but still necessary), but the sheer ability of the men to play above the rim is more amazing than anything any other athlete can do.  (3) Soccer: Clearly the ability to run basically non-stop for two 45-minute segments is very impressive, and what they are able to do with their feet is unique and sometimes incredible. While a soccer player may be able to learn to shoot a basketball, most basketball players couldn't learn to kick a soccer ball effectively.  But, you dont have to be particularly big or strong to play, and the sheer complaining that goes on with every little bit of contact knocks them down a little for me. (4) Hockey: The ability to skate quickly and change directions quickly on ice amazes me, but c'mon it's hockey, and i just think you dont have to be that smart to play hockey.  It helps to be strong, but not as much as in football.  (5) Boxing: The fact that you are willing to take hundreds of punches in the head is pretty stupid to me, but the endurance of boxers is underrated, obviously hand-eye is a big key to boxing, and I guess your skull needs to be durable, its by far the greatest mix of courage and stupidity in sports (6) Baseball: If I could move it down any lower, I would.  The thing that irks me about baseball is the ridiculous injuries that occur, especially being a non-contact sport where most of the time you are playing there is no action going on, pitchers throw every 5th day and yet all of them blow out their shoulders.  Now, as far the positives, the hand eye is greater in this sport than any other sport (maybe golf), but you can be fat and slow and play (Ryan Howard) and you can be little and weak and play (David Eckstein), you dont have to have too much intelligence.  I am not saying that baseball is not a difficult sport to play, but so is bowling. (7) Tennis: While I do think you have to be in better shape to play tennis than baseball, the injuries are just as ridiculous, the hand eye (while still important) is not as prevelant in tennis, and there is constant stoppage of play, much like soccer there is also a ton of whining which for me takes away from being "an athlete".  And here is what puts in at the bottom of this list: players will actually quit from matches in major events over a blister.  It's the equivalent of a football player quiting during the Super Bowl because of a broken finger.  Guys have played in other sports with broken legs, torn knee ligaments, and other more painful ailments, but tennis players cant play with blisters. (8) Golf: All you need is hand-eye coordination and alot of money and you can be a pro golfer.  You can be fat, drunk, have no strength or size, and be a complete moron, and can hit a golfball.  Don't believe me, let me introduce you to John Daly.  He won two majors.  That being said, I will always say at its core, golf is the most "difficult" major sport. Now, let me say this, I RESPECT THE ACTUAL SKILL INVOLVED IN ALL OF THESE SPORTS.  TO BECOME A PROFESSIONAL IN THESE SPORTS IS A GREAT TASK.  AND I AM IN NO WAY SAYING I COULD BEAT ANY PRO IN ANY OF THESE SPORTS.  But, that being said baseball and tennis players are wimps.