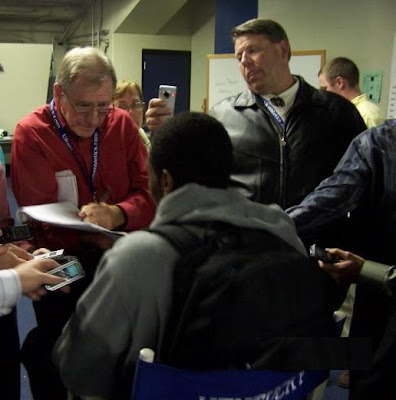 Yesterday, Kentucky was coming off an impressive win over Georgia, the Tee Martin news, and Duke losing.  And do you know the comment topic on this website more than other: Jerry Tipton.  Tipton released an article saying that UK may have broken a minor NCAA violation concerning Larry Brown.  And to be fair, Tipton had a quote from Josh Harrellson saying that Brown participated in practice, which would break a very minor rule.  But honestly, that isn't the point.  The contention from many UK fans is that Tipton only writes negative things about UK and is just trying to "bring the program down".  Thus, the fact that Tipton wrote about this potential violation was just another example of his attempts to hurt the program.  Here is what I want to know: Why should I care to the point of actually getting worked up about this man?   Former writer on this site sent me a tweet saying that I should hate Tipton because he helped blow up the scandals of the 1980's in the basketball program.  To which I responded, "didn't we actually commit those rules violations"?  It's not as if Tipton came up with the Emery package out of thin air.  Kentucky actually did do that cheating, if I remember correctly.  So, to use that as an excuse is ridiculous.  And frankly, if Tipton is truly trying to bring the program down for some reason, that's pretty silly.  That isn't what a journalist is supposed to do.  But, as a fan or player or coach, what does it really matter?  If Kentucky is truly clean, then he can make up whatever bull he wants because then NCAA can't prove it.  Take for instance, the Patrick Patterson SUV incident from a couple years ago.  Tipton wrote some erroneous story, which turned out the be false, and the world kept spinning.  Honestly the only person hurt in that situation was Patterson, and he was just annoyed by it all.  But UK fans should not have been bothered.  Patterson kept playing, UK kept winning, and that's what fans should care about.  If Kentucky is actually committing rules violations though, and Tipton reports it, then I don't think you can criticize him for that.  I guess my question is this: Do you feel that a hometown writer should look the other way if he finds a violation?  Because it seems many fans act that way. What does his negativity actually accomplish?  Really, that isn't going to sway UK fans' opinions about the program.  And fans from other fanbases have also made up their mind, especially since Cal came, so he doesn't really sway them either.  In the end of things, anything Tipton writes is fairly pointless.  Which is why I will once again ask: Why do so many of you let his writing anger you so much?  So one bad writer at a failing mid-level newspaper is negative?  You act as if he is actually affecting the program.  You act as if his articles lead to poor play or lead to fans not showing up.  None of that happens. My overall point is this:  I COMPLETELY AGREE THAT TIPTON IS AN OVERLY NEGATIVE WRITER.  Let me repeat that: Tipton is negative, and clearly does so intentionally.  I am not defending his integrity or talent in his profession.  But does he actually had an effect on the love you have for the University of Kentucky?  And if the answer is no, then why not just let it go.  Why not just let him put his mediocre articles in the paper until it shuts down and continue cheering on the Cats in a positive way while he grumpily sits at midcourt?  Answer this question: TELL ME WHY I SHOULD CARE ABOUT JERRY TIPTON.  So many of you seem to care more about his articles than the team itself.  Convince me why I wrong that Tipton is a non-factor.  I would like to hear actual arguments about why his writing matters.  I don't care to read the middle school crap about what an old geezer he is, and all the gutless threats that people want to throw out.  I want to know REAL TRUTH about why he gets you so worked up. The way I see it, we have a great basketball team currently playing for another SEC title.  We have some amazing recruits coming in next season.  We have a coach that is on fire right now on the college scene.  We have so much positive in the program, why can't we just let this one negative man spew his crap.  On this website, we bring up Tipton in a joking manner.  It is impossible to act like he doesn't exist, so we will link his articles and make silly jokes.  But so many actually display HATRED towards this guy, as if he personally offends you.  Tell me what I am missing and why this guy strikes at your soul.  Ready.  Go.  (And yes, I know, I suck for not understanding why Tipton matters.  Get over it.)