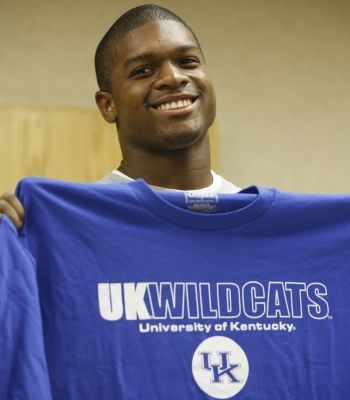 It has been no secret that I am not a huge fan of Morgan Newton, or more accurately, I think his freshman year "success" was more a product of a good UK defense and Randall Cobb winning games for him.  So, when Mike Hartline was selected as the starter this season, there is no doubt I was in support of that decision.  And I don't really know how people can argue that Joker made the wrong choice there.  Hartline played very well most of the season, pretty much won the South Carolina game himself, and somehow got UK to a bowl despite the worst UK defense in years. But, when Hartline screwed up and lost his job as starter for the bowl game, I have to admit I think it might have been a POSITIVE for the program.  Because frankly morale from the fanbase has not been this low since Andre Woodson's sophomore season, or 6 years ago.  The fanbase truly doesn't care about this football program right now, as shown by the mediocre tickets bought for the bowl game.  In part this has to do with a very underwhelming season, but it also has to do with the future.  When Kentucky fans see Randall Cobb and Derrick Locke likely on the way out, a defense that did not shown much this season, and a coaching staff in transition, the fans have very little to be excited about. But, Morgan Newton still holds the fans attention.  He came in with more hype than any UK football player since Tim Couch.  With his wins at Georgia and Auburn last season (whether legit or not), the fanbase truly thought they were seeing the future of the program.  But then Hartline beat him out in the fall, had a successful season individually, and people forgot about Newton.  Well, now things have changed. Newton has a chance, with a very good performance against Pitt, to give the fanbase something to be excited about coming into next season.  If we have a talented, improving, quarterback on the roster, suddenly the fans have something to make them come out to Commonwealth and renew those season tickets.  Suddenly fans can rationalize Kentucky being a challenge in the SEC again.  Suddenly, fans can feel good about keeping grasp of the rivalry over Louisville, and keeping even with the Tennessee's and South Carolina's of the conference.  On the flip side though, with a poor performance, the fanbase could literally give up of the 2011 season before it even starts.  So, my question for you is: Would an impressive Morgan Newton performance at the bowl regain your interest in the UK football program for 2011?  Can Newton save the program for the time being?