BTI's Rants and Ramblings: Storming the Court, Could it Happen at UK? 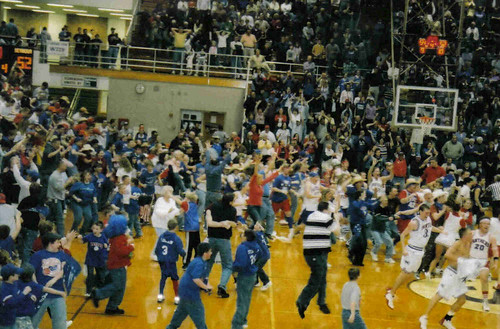 Interesting talk broke out in the Clear Channel offices last week about storming the court in college basketball after Indiana students and fans flooded the court after beating 20th ranked Illinois.  Those in the office tried to dig deep into our minds to think of a time that Kentucky fans had done such a thing.  I know I couldn’t remember a time, and nobody else could.  Somebody mentioned that they remember it happening at Memorial in the 1960’s, but couldn’t remember the game.

So, going under the assumption that fans have never stormed the court at a UK game in the modern era, the discussion quickly moved to what it would take for something like that to happen.  And generally, 2 lines of thought were discussed:

-Some argue that you can’t storm the court without beating a great opponent in an upset OR with a buzzer beater over a top opponent.  In Kentucky’s case, it’s rare that they are big underdogs at home.  Since moving to Rupp Arena, Kentucky has beaten 5 teams ranked in the Top 3 at the time of the game.  Here are those instances, with Kentucky’s ranking in parentheses:

Only the game in 2008 was Kentucky not in the Top 10.  And I don’t remember there being a huge push to rush the floor in that game.  Because UK has been ranked in the Top 20 for most weeks over the last 20 years, they just don’t have the shock and awe of winning a game at home that teams like Indiana or Penn State or Iowa State have.  I mean really, how often have you been really SURPRISED that Kentucky won a game at Rupp Arena?

Some would argue that it not only is the opponent who must be right, but there must also be an exciting finish as well.  To me, this argument is crushed pretty easily with 1 game:

1987: Kentucky beats Louisville with tip-in at the buzzer

Kentucky beats its most heated rival with a buzzer beating tip-in, and if I remember correctly, fans did not storm the floor there.  Of course, Louisville was unranked that day and Kentucky was ranked #1, which brings me to the 2nd school of thought of what it would take:

2) STATE OF THE PROGRAM

Some have argued that Indiana has dropped so far, even beating a team like 20th ranked Illinois was enough to storm the floor.  That’s why at places like Duke, they seem to storm the field with every football win.  When a crappy program pulls an upset, the pure emotion of that leads to floor storming.  And because Kentucky has not dropped the level of Indiana, even during probation, that is why fans don’t storm.  If Kentucky put together 3-4 straight years of sub-.500 play, then maybe a win over a Top 25 team would change that.  I disagree, but some in the sports office argued that.

Since coming off probation in 1992, Kentucky has never been so down as the last 2 years of Tubby Smith and the 2 years Billy Gillispie.  In that 4-year stretch, Kentucky only beat 3 ranked teams at home:

Did we consider storming the floor then?  I don’t think so.  Then, following that 4 year stretch of sub-par play, Kentucky beat 10th ranked North Carolina at home early last season, with a close ending, and nobody ran onto the floor afterwards.  So, just how bad does it have to get at Kentucky before it would be acceptable to flood the court?

Give me your opinion: IS THERE A SCENARIO WHERE UK FANS WOULD STORM THE COURT?  BEATING DUKE ON A LAST SECOND SHOT?  OR IS IT JUST “BELOW” US TO DO THAT?