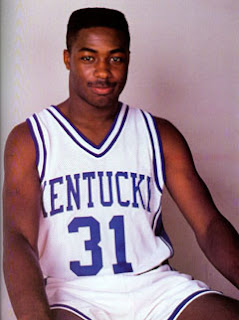 Remember this guy? UK prides itself on having some of legends of college basketball hanging from the rafters and in the record books in Lexington.  Guys like Ramsey, Riley, Issel, Dampier, Beard, Givens, Mashburn, and Patterson will never be forgotten by the UK faithful.  But, there are some guys who made a large impact in the program who seem to slip from the minds of UK fans when memories of the past are discussed.  Guys who might not deserve their jerseys in the rafters, but deserve the appreciation of the fanbase just as much as the legends.  Here are 5 guys that come to mind for me, and you can give me some of yours: 1) Gerald Fitch Career: 1,391 points (23rd all-time), 232 assists (34th all-time), 154 steals (13th all-time), 199 3-pointers (4th all-time) Why do we forget him:Because we are just 6 years past Fitch's graduation from Kentucky, some people will claim that Fitch has not been forgotten.  But, I would contend that Fitch had a better career than Chuck Hayes, andas big an impact as Keith Bogans, yet those two guys get constant mention.  20 years from now, Fitch will rarely be talked about, I can promise you.  I am not sure there is a single player whose career could have been shifted forever with one shot: Fitch's miss against UAB in 2004.  If that shot falls, Fitch could have very well led UK to a Final Four, because that team was the overall #1 seed that year.  If the Cats go to the Final Four that season, I think Fitch is under discussion for jersey retirement.  Just my opinion.    Fitch was 2nd leading scorer on the only undefeated SEC team in 2003, but Bogans is largely given the most credit on that team.  Fitch was 1st team All-SEC his senior season, andwas the SEC Tournament MVP.  He is largely forgotten because he came in with little hype, was not spectacular his first two years, and had disappointing finishes his last 2 years.  He also played with Prince and Bogans, who greatly overshadowed him.  ________________________________________________________________ 2) Deron Feldhaus Career: 1,232 points (36th all-time), 540 rebounds (40th all-time), 270 assists (39th all-time), 98 steals (31st all-time) Why do we forget him:Look, I understand Feldhaus' jersey has been retired at UK, but I think he is clearly the least remembered Unforgettable.  Yet, he was the 2nd most productive member of the foursome, well ahead of Farmer and Woods.  But Feldhaus never was the leading scorer during a season, and Jamal Mashburn was the go-to scorer in Deron's last 2 seasons.  Also, Feldhaus has no defining characteristic, like Farmer has his mountain background, Woods has the shot against Duke, and Pelphrey was the best player.  Feldhausgets left behind, and its a shame, because he was just as instrumental to the resurgence of UK basketball as anyone. _________________________________________________________________ 3) Dale Brown Career: 109 3-pointers (21st all-time) Why do we forget him:Well, first of all, Brown only played 2 seasons.  Much like Ron Mercer (who I say is the best UK player I had ever seen until Wall), the fact he was only briefly at UK hurts his notoriety.  Brown transferred from a junior college, but unlike most in that situation, became an immediate impact player.  Four players scored in double figures against Duke in 1992: Mashburn, Woods, Pelphrey, and Dale Brown.  Brown scored in double figures of 4 of the 5 tournament games in 1993.  He was a starter on a Final Four team, and many people will claim that if Brown had not got hurt against Michigan, the Cats beat the Wolverines.  He was a great shooter, perfect for the Pitino system, and had an ability to hit the big shot.  A poor man's Tony Delk.     ___________________________________________________________________   4) Kevin Grevey Career: 1,801 points (7th all-time), 547 rebounds (38th all-time) Why do we forget him:Ask people to name the Top 10 scorers in UK history, and I can almost guarantee the one forgotten most is Grevey.  Ask people about the legends of UK, and Grevey's name never comes up.  But, besides Issel, Grevey may have been the best pure scorer in UK history, and he only played 3 seasons.  Given a 4th season, and he likely is the 2nd leading scorer in school history.  Grevey made a Final Four, but lost in the title game to UCLA.  He wins that game, andhe is likely mentioned in the same breath as Goose Givens.  They lose that game, andhe fades away.  He falls into the Keith Bogans category as guys who didn't win enough to become legends.  Maybe this is just my age talking, but I never see older people mention Grevey either.  ____________________________________________________________________ 5) Thad Jaracz Career: 982 points (60th all-time), 626 rebounds (29th all-time) Why do we forget him:I put Jaracz on her because of my dad.  He talks about the teams that Jaracz plays on and says that he might have been as important on those teams as Riley and Dampier.  Heck, Jaracz was an All-American in his sophomore season.  But, for whatever reason, his stats actually declined his last 2 seasons.  One might have been having Dampier on the team, and then Dan Issel his senior year.  I don't know what the reason is, but I know that my dad speaks very highly of him.  If the Cats beat Texas Western in 1966, Jaracz might be more highly remembered, as he was the 3rd leading scorer on that team.