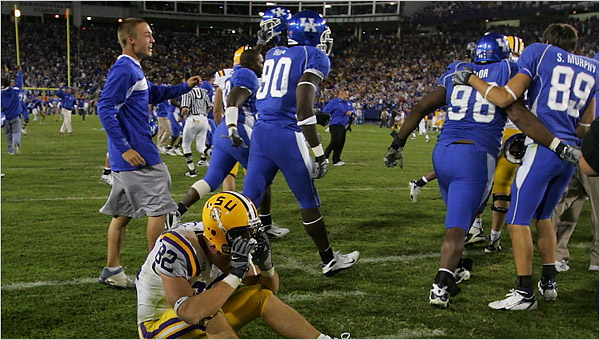 In the issue of fair journalism (because that is what I am), shortly after I published yesterday's article about UK recruiting better than UL, the Dirty Cards got a couple new football committments which pushed the Cards class past UK in the scout.com rankings.  Louisville is now 27th and Kentucky 29th.  When I published the article at 10AM, those new commits had not been included and UK still had the lead over UL.  So while it was certainly bad timing for me, I put up the most up to date info I had.  So suck it. In the rivals.com rankings, Kentucky still holds a significant advantage over the Cards, ranking 28th compared to the Cards 47th ranked class.  Personally, Rivals is better in football.  It's a proven fact.  There have been studies.  Look them up. ___________________________________________________________________________ I have been wondering this week how big a win over Florida would be this weekend.  I have been somewhat disappointed in the lack of real excitement in the game, seeing as Florida seems to be down, Kentucky is playing very well, and it's just about damn time we break this streak to the Gators.  Now, that doesn't mean it won't still be very tough for UK to win on Saturday, because I realize it will still take a huge effort to pull it off in the Swamp.  But the sheer fact that Kentucky has a legit shot to win this game show excite the fanbase greatly, and I don't get that feeling.  It seems to me more people want to know when the Bledsoe report is coming out than they are about actual games that are going on. But that is a rant for a different day.  I wonder just where in UK Football record books a win over Florida would rank.  I have put below 10 games that come to mind for me as huge wins in UK history.  How high up on the list would this game go?  I would argue it could rank as high as 4th in the UK history books:  1. January 1, 1951: Kentucky 13, #1 Oklahoma 7 (Sugar Bowl) -Cats take down national champion, staking some claim to the title 2. October 13, 2007: Kentucky 43, #1 LSU 37 -Cats take down top ranked Tigers, who go on to win national title 3. January 1, 1952: Kentucky 20, TCU 7 (Cotton Bowl) -Cats win BCS level bowl over national power TCU 4. October 4, 1997: Kentucky 40, Alabama 34 -Cats upset Tide for first time since Lincoln administration 5. September 15, 2007: Kentucky 40, #9 Louisville 34 -Cats beat Top 10 team for first time in years, do so in dramatic fashion 6. November 24, 1984: Kentucky 17, Tennessee 12 -Cats last win over Vols, did so in Knoxville to catapult into bowl game 7. September 5, 1998: Kentucky 68, Louisville 34 -Cats open Papa John's Stadium with record breaking win over Cards 8. September 3, 1994: Kentucky 20, Louisville 14 -Cats renew rivalry with Cards with close win in Lexington 9. December 29, 2006: Kentucky 28, Clemson 20 (Music City Bowl) -Cats get first bowl win in 22 years in upset over Tigers 10. November 4, 2006: Kentucky 24, Georgia 20 -Rich Brooks gets first huge win as coach, breaking 10 game losing streak to Bulldogs