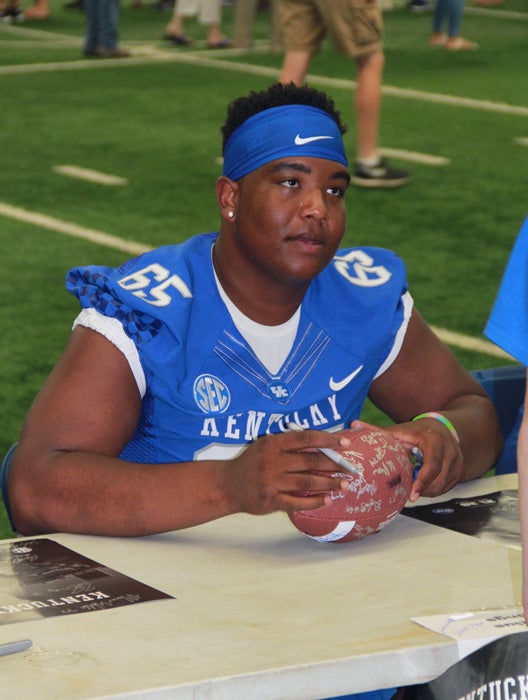 247Sports[/caption] Gaining weight freshmen year in college happens to many students, even athletes. The Freshman 15 doesn't only apply to regular students, but to football players as well. Bunchy Stallings credits his weight gain to the daunting Freshman 15. When Stallings arrived at Kentucky he weighed 330 and by the end of his freshman year he was up to 350. "When I seen that, I just knew it was time," Stallings told Jen Smith of the Herald-Leader. "I’ve never been that big in my life. I was, like, I can’t do this anymore." During the offseason, Bunchy and his brother TrÃ© Stallings, former Ole Miss and Kansas City Chief offensive lineman, spent a month exercising and dieting together.
"It was tough," Stallings said. "I couldn’t have butter, dairy. No milk. I was eating sprouted grain bread. That’s the only type of bread I could eat. I ate a lot of just eggs and stuff like that. No seasoning and a ton of vegetables." Stallings returned to campus and trained more with Corey Edmond and UK's strength and conditional staff where lost a total of 50 points. Stallings currently weighs 316, the lightest he's been while at Kentucky. Last week Stallings earned his first start at Alabama, something that would never of happened without the incredible offseason weight loss. "I feel great about it now. I can see the results. I can see myself moving faster, see myself being stronger, so just trying to keep it going," Stalling said.