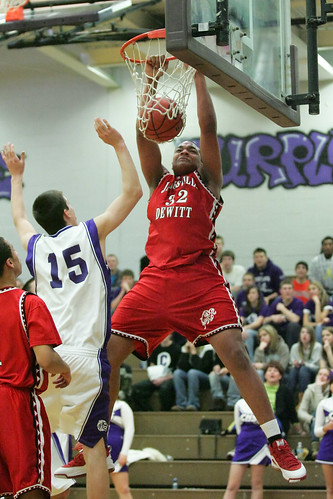 The celebratory Gatorade still hasn't dried itself out of Doug Harrellson's goatee, but Coach Cal has already taken to the road to work on the future, stopping in New York to check out five-star center DaJuan Coleman.  Coleman is a 6'8", 280 pound five-star center from DeWitt, New York and ranks as Rivals' third-best center in the class of 2012 and the eight-best prospect overall.  He recently called Ohio State the favorite to land him, but also has offers from the Cats, Louisville, Kansas, UNC, Pitt, Syracuse and Virginia Tech.  He also has a neck tattoo, which I believe would be the first in school history - unless Cliff Hagan also had one.  I can't remember. Watch him work: