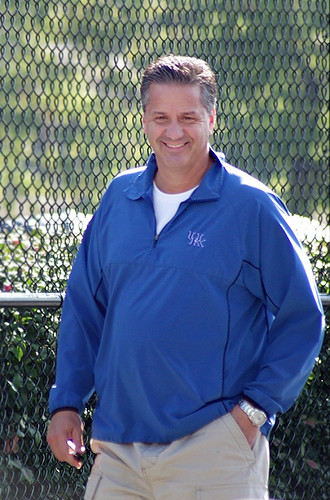 Calipari spoke at the Louisville Alumni Luncheon this afternoon, and pretty much repeated everything he said on the radio show Friday morning, but there were a few new soundbites to go over. There's been a lot of talk about how many players could go in next year's draft. Cal's guess? He said he believes six or seven players will go pro after this season. He then gave his thoughts on some of the players, which, again, was mostly stuff we heard on Friday, but here's the rundown: Julius Randle: Cal said that if he only cared about winning, he would put Julius Randle underneath the basket and that he's putting him back out on the floor to prepare him for the next level. Jon Hood and Jarrod Polson: Cal's no longer afraid to put Hood and Polson in a game, and joked that at times last season, he would be forced to put them in and just closed his eyes in fear when he did. Us too. Marcus Lee and Derek Willis: Yet again, Cal singled these two out as the "surprise" players on the squad, comparing Lee to Dennis Rodman and Derek Willis to Bobby Jones (who used to play for the 76ers, Google tells me.) Willie Cauley-Stein: Willie will start practicing again on Sunday after injuring his hand. Alex Poythress: Has returned to practice after hurting his hamstring. Cal said Alex is going against Julius Randle and James Young in practice and "it's competitive." The team as a whole: "They don't play hard enough yet, but they're good." Cal opened up a little more about his goal for an undefeated season, saying that it's something he wants to accomplish before he retires: "Before I retire, I'd like to coach an undefeated team because they say it can't be done." He mentioned his three teams that came close (2008 Memphis, 2010 Kentucky, 2012 Kentucky), and said that the goal of going undefeated can keep players in the moment because players realize that each game is just as important as the next. Something tells me that's going on a sign in the Joe Craft Center sometime soon. It wouldn't be a Cal speech without a little trash talking. When talking about being everyone's "Super Bowl," Cal said that his players don't know what day they're playing Florida, North Carolina, or even Louisville, but that the players on every team they face know when they're playing Kentucky:

"If I ask my team when we play Florida, they're not going to know. North Carolina? I'm telling you--and I'm going to do it today because I've thought about it--they don't know. You think they know when we're playing Louisville. They don't know. They know 'Is there a meal tonight?'. They don't know. Now, I ask you this. Does everybody on our schedule know when they're playing Kentucky? All they know, and that's in their locker, on the ceiling of their bedroom. You gotta deal with that, and it's part of being at Kentucky. Not only do they want to beat Kentucky, they want to beat you as an individual player. You know why? They wanted that scholarship you got and they want to prove they're better than you, not just their team is better than Kentucky. So that's the challenge that we have. But would you want it any other way? I don't. Bring it, let's go."