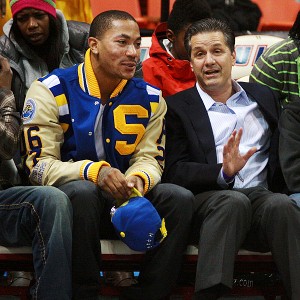 Frank Isola of the New York Daily News tweeted earlier today that the Knicks and Calipari are already working on the move:

Lot of NBA people believe John Calipari to the Knicks is already being set into motion. (Not sure how this impacts Rod Strickland)

Isola mentioned Cal's link to Isiah Thomas, as well as Amar'e Stoudamire, Carmelo Anthony, and Larry Brown, who has a link to Mike Woodson. Another NBA guy, Yahoo!'s Adrian Wojnarowski, believes New York is the prime spot for Calipari. But with all these talks about leaving Kentucky, Coach Cal still stands by his claim that "he has the best job in basketball." He told Mike Decourcy, "I’ve got more money than I’m ever going to spend, so I don’t have to make a decision based on finances." Cal also said he plans to attend NBA games this season, but only to see his former players, not because he's interested in jumping to the league. "I might even pop into New York," he said. I like his plan to check-in with Josh Harrellson, but with all these Knicks rumors, I'd rather see him catch Jorts in Cleveland on April 20th. You know, just to be safe. Don't leave us, Cal.