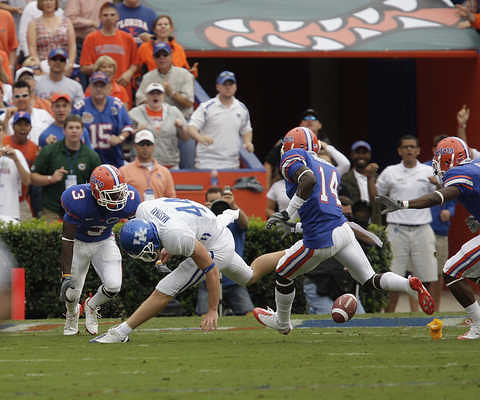 Typically, I don't think the SEC football schedule does Kentucky any favors. We always get Florida early and Tennessee late (Florida when they are ripe with playmakers itching to burn up the yardage and before they get beaten up by the SEC schedule, and the slow starting deer hunters by the time they are clicking on all cylinders) and it always seems like we get other SEC foes right after big losses when they are looking to exact their revenge. We also always seem to catch teams on the upswing, like Mississippi State last year, or before the wheels come off and their players start mailing it in, like South Carolina. . .heck, pick a year. This year, however, it looks like we might have caught a break with the scheduling gods. I think we are catching Florida at the right time. Take a look at Florida's opening game wins over the last two years: That is a pretty healthy record of domination. Florida routinely scores 40 or more points and holds their opponents to single digit scoring (with the exception of Troy that was so out of hand by halftime that the waterboys were playing D in the 3rd quarter when Troy errupted for 17 points). Even Miami wasn't able to score on UF. Now look at Florida this year: Uh oh. Already, lesser teams are showing an ability to score on the Gators. And those teams don't have guys like Cobb and Locke running around on the gridiron. Additionally, while most of the non-conference UF games were over by halftime, the South Florida game was tied at 7 at the half, Miami (OH) was only down 15 by halftime, and UT was only down 7-3 at the half. The Gators come out of the gate slowly this year and they simply aren't the dominating presence they have been the past few seasons. Consider all that and the fact that Urban Meyer just pulled a football version of Bobby Cremins/Billy Donovan of leaving then coming back as well as losing his BFF, Mr. Tebow. I know he is a GREAT coach, but you can't honestly believe he is giving it his normal 110%. Look, I'm not saying we are going to blow the doors off the Gators and I can't even guarantee a win. But, unlike usual, this is a vulnerable Florida team that is facing a very capable, scrappy Wildcat squad. I wouldn't be surprised if the Cats snuck into the Swamp and managed to pull out a win. It would be a statement win for Joker and one of the biggest W's of all time. Man, I hope it happens. Go Cats.