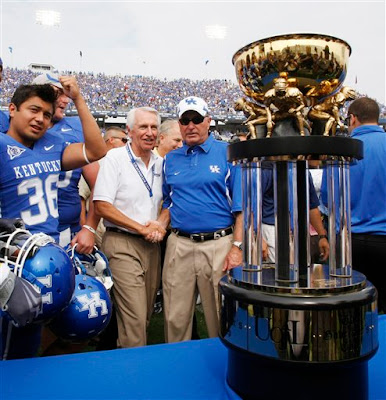 Our friends at Card Chronicle report today that the line has moved on the UK-UL football game. Whereas it opened earlier this summer as a 7 point UK favorite, now the Cats are considered a three point favorite by the boys in Vegas. This new line likely follows a bit more closely to the "conventional wisdom" of the game, which sees UK as the favorite but both teams young enough that the game should remain close. Add to that the jacked up atmosphere of Louisville's first game under its new coach and one can see that a line around a field goal probably seems appropriate. I cant remember a UK-UL game like this in a long time. Two new coaches, new directions for the programs, yet one team (Kentucky) with a lot more expected than the other. The tension (and the heat) will be turned up in the middle of Papa Johns Stadium on that Saturday afternoon.