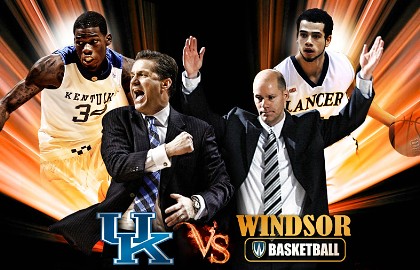 I know some people use KSR as their one stop shopping point for all things UK. With that spirit in mind, I thought I would post (repost actually) some of the relevant information from the Wildcat tour of one Canadian city. Let's do it: Where Is It: Windsor, Ontario at the St. Denis Athletic Centre, home of the University of Windsor Lancers. The Centre opened in 1980-81 and is a multi-purpose facility administrated by a Community Use Agreement (that lets the good people of the City of Windsor and the County of Essex use the indoor and outdoor facilities during specific times). It has a fan capacity of 2,500 for basketball games. Windsor is real close to Detroit and they are in the Eastern timezone. What Is It: The OUA/NCAA Tip-off Classic. OUA stands for Ontario University Athletics. When Is It: Sunday, August 15th — Windsor Lancers vs. Kentucky Wildcats 7:00pm EST — Game Tip-off Monday August 16th — Western Mustangs vs. Kentucky Wildcats 7:00pm EST — Game Tip-off Tuesday August 17th — Windsor Lancers vs Kentucky Wildcats 11:00am EST — Game Tip-off Remember that all games are EST and going to be broadcast locally on the Big Blue Network (the same local channels that carry the Cats games in your neck of the woods) or on Fox Sports (South and Ohio). The games will be radio broadcast on 840AM out of Louisville and 630AM out of Lexington. UK Athletics is also streaming the games and the links can be found here. Now you know. And knowing is half the battle. Pork chop sandwiches.