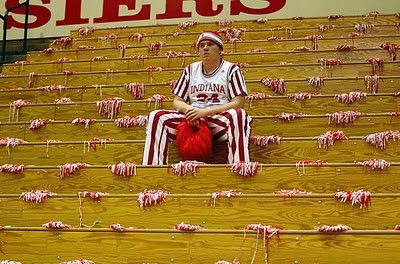 Tell me if I am wrong, but Kentucky likely does not win this game without Josh Harrellson.  The senior recorded a double-double with 14 points and 12 rebounds, giving the Cats a much needed post presence with Terrence Jones struggling, as well as keeping the IU big men under wraps for the most part.  The argument that Kentucky could not win without both Knight and Jones playing well was squashed, with Jones playing poorly for most of the game, and Knight not getting a lot of shots.  The guy who was the deciding factor was Deandre Liggins, who despite stinking on the free throw line, put in 19 points.  And Kentucky finally showed some energy in the last 10 minutes to pull away from an out-manned Indiana squad, getting a 81-62 win.  The win keeps UK undefeated at Rupp Arena in the John Calipari era, but it was a struggle to say the least. Matt will start his postgame show on 840AM in about an hour.  We will post the phone numbers and streaming link shortly.  But for now, just enjoy a couple guys who have stuck with the program through Gillispie and bench time and were the KEYS to beating IU for a 82nd straight time.  Josh Harrellson and Deandre Liggins: drinking to you tonight.