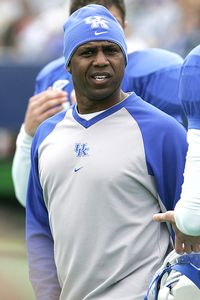 SEC football blogger Chris Low has a team by team recruiting analysis over at the WWL's college football site for those of you that have no idea what went down yesterday. Here is what Low had to say about Operation Win's signing class:

Recruits: 26 (23 high school seniors, one enrolled early, one prep school player and two junior college players, one who enrolled early). Top prospects: Brandon Gainer is a four-star running back from Miami who’s capable of filling out to the 215-pound range. Dale Trimble and Eric Simmons were both rated among the top 25 cornerback prospects nationally. Sleepers: Tyler Robinson has what it takes to play either tight end or defensive end in college, and although Tim Patterson of Louisville wasn’t rated real high nationally, he’s an athletic middle linebacker with great size who has a chance to move to defensive end at the next level. Needs met: The Wildcats were gutted in their defensive line, especially inside, and made that a priority. Defensive tackle Bruce Laughlin will get a chance to play early. Donte Rumph, who initially signed with Kentucky last year, could play either tackle or end. Jerrell Priester has a chance to be one of those do-it-all running backs the Wildcats like. They could have used another receiver in this class. Analysis: There aren’t a lot of highly rated players in this class, but Kentucky typically hasn’t raked in four- and five-star guys. Randall Cobb wasn’t rated out the roof coming out of high school, and he’s done just fine in the SEC. This was Joker Phillips’ first class after taking over for Rich Brooks, and he went hard after the Wildcats’ needs and went down to the final hour before getting several key players to sign. One thing's for sure: The Wildcats will have to continue to replenish on defense if they want to keep going to bowl games. That was the secret to their improvement under Brooks. Scouts Inc. grade: C+ What Joker Phillips said: * "I have not been a part of a class [that has changed this much in the last 24 hours]. It says something about how relentless we were in this last 24, 48 hours in trying to get these kids to get the faxes in for us." * "We're not worried about recruiting. We're going to continue to do what we do, which is battle 'til the end. We'll sign great players. We'll be in some of those battles late in the game. That's what we did in this class." * "We always talk about the heart and soul of our program has to be in the state of Kentucky. What's the biggest population in the state of Kentucky? The city of Louisville. We have to be successful in the city of Louisville, and we have."