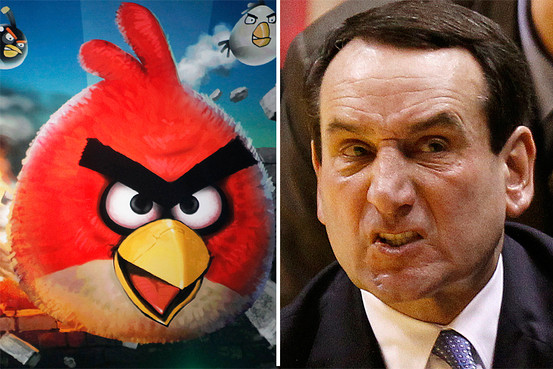 It seems as though everyday you hear of a new story involving the douchebaggery of the NCAA and their inconsistent and morally absurd enforcement of their already morally absurd rules. What the NCAA describes as enforcing their rules and protecting the culture of amateurism often looks on the outside to be selective enforcement, with no regard for previous precedents that they themselves have created. One of the biggest topics under the umbrella of the NCAA’s rule is player transfers. Under the current NCAA rules, a student-athlete must sit out a year of eligibility upon transferring between D1 schools unless a hardship waiver is granted, or if the player is enrolling in a graduate program not offered by their current university. Most recently to speak on the topic is none other than Duke head basketball coach Mike Kryskfhjeoirj, who told ESPN.com that he believes the current transfer rules are a “farce” and he would like to see a single rule in place that covers all transfers, with no exceptions. As much as it pains me to say, I agree with him, on most accounts.

“There should be no exceptions,” Krzyzewski told ESPN.com. “Everybody should have to sit out, that includes a fifth-year player, just to make it equal. I think it’s a farce, really.”

Take note, NCAA. One way to avoid the media and general public chasing you through the streets with pitchforks and torches is to eliminate any possibility that an action of yours is viewed as favoritism or selective enforcement by unifying each situation into one rule. In a backhanded way, Coach K touched on what I believe the answer to this problem is, although his ultimate conclusion is off base.

LET THE KIDS PLAY RIGHT AWAY.

Asking a player to sit out a year after transferring schools was meant to reduce schools “poaching” from others and preventing what they believed would essentially become an NCAA version of free agency every off season. In reality, kids will transfer no matter what. Maybe the fit wasn’t quite as right at a certain school as they thought, maybe they’ve become strung down the depth chart for years behind better players, or maybe a family situation calls for them to be closer to home. How about this? Maybe the coach they committed to has either been fired or left voluntarily to meander to any University they’d like. Oh, and the coaches get to be on the sidelines from Day 1 unlike the young minds they are supposed to be role models for. Players wishing to transfer not only must limit their choices to those that their current school allows (although that rule appears to be changing soon), but sit out an entire season while continuing to practice with the team and maintaining their grades at the same level as if they were playing. No student-athlete is actively looking to jump from school to school each season despite the NCAA’s concerns, which begs the question: “Who is the NCAA really trying to help? The schools or the athletes?” The current rules protect schools and coaches from any form of perceived exploitation while at the same time ignoring the fact that the work put in by players on the courts and fields is an enormous cash cow for the Universities, with only a small portion of those billions of dollars eventually funneling down to it’s work force. Who’s taking advantage of who again?

If the NCAA wants to do right by the student-athletes as they claim to have done since their inception, they’ll remove any transfer restrictions on players and allow them to play immediately on a one-time basis, as long as they are in good academic and legal standing. If that player wants to transfer again, then you must sit out a year. Don’t tell them where they can and can’t go to school at, because at its core, that is the absolute opposite of what the NCAA claims to be its sole purpose. If you’re going to allow a coach like Steve Alford to sign a 10-year contract with New Mexico and recruit players based on the idea that he will be their coach, then allow him to 10 days later leave and take the coaching job at UCLA, then you must provide an out for the players as well. While the NCAA has granted players in similar situations waivers, the process is still very judgmental and they have proven time and time again to be devoid of common sense in some rulings.

My plea to the NCAA is simple, acknowledge those who drive your billion dollar industry are being hindered, not boosted, by your rules and make the necessary changes to help their college experience be as fulfilling as you claim to want for them.