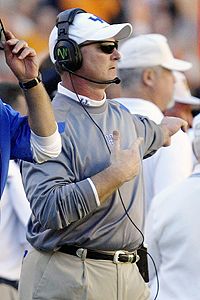 ***WARNING: This came from a message board*** According to Gary Ferman of CaneSport.com, the "buzz" is that Miami head coach Randy Shannon is interested in talking with UK quarterbacks coach Randy Sanders about the Canes' offensive coordinator position. Besides being impressed with his first name and the way he wears the color orange, Shannon must be mesmerized by the fact that Sanders was able to add "bowl-winning" in front of "QB Mike Hartline".  In all seriousness, though, Sanders appears to have no real connection to the school or Shannon (at least none I'm aware of), but a move to a coordinator position at a traditional power would be a promotion to say the least and probably a hard job to pass up.  We've outlined a number of times the importance of Sanders to the past few seasons of UK football improvement and losing him would be a blow to both recruiting and the development of the quarterback position. Ferman also reported that the Canes could be interested in talking with New York Jets offensive coordinator Noel Mazzone, who has served as an offensive coordinator for Ole Miss (1995-98), Auburn (1999-00), Oregon State (2002) and NC State (2003-05).