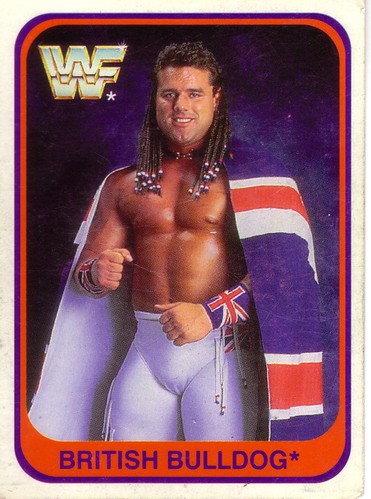 Good morning ladies and gents and welcome to the most brief and insufficient news and views in the history of the site.  I'm still trying to recover from all of the Thanksgiving goodness today on the college basketball radar and I just can't wait to be back in the office in the morning.  So, since I'm oozing with enthusiasm, things are going to be a little brief on what would have been the British Bulldog's 46th birthday. On to the news... (1)  Considering that the team is getting ready to enter a winnable game in a series where they've won once in my lifetime, things have been a little quiet on the football front.  There have been a couple of Fulmer stories out there and a few people have hit on the Randall Cobb angle, but it seems like this game is being kicked to the curb a bit by UK fans who are focused on basketball and UT fans who are focused on....well basketball.  And Lane Kiffin.  But, Rich Brooks did say today that his defense is "going backward", but he's still optimistic. (2)  Big congratulations on the football beat today, though, go out to punter Tim Masthay, who was named First Team Academic All-American.  In addition to being one heck of a punter, Masthay has been bringing the pain in the classroom, where he carries a 3.81 GPA and does a lot of community service work (including that summer mission trip to Africa that the Daves looooove to talk about).  Masthay, who was named to the Second Team last year, is also a finalist for the NCAA Top VIII Award, Draddy Award, Danny Wuerffel Trophy, Bobby Bowden Award, Lowe’s Senior CLASS Award and John Wooden Citizenship Cup. (3)  We'll dive in a little deeper today to the Cats Friday evening opponent, but Sports Illustrated has a piece looking at the struggles at point guardso far for Billy Gillispie's squad and how they're still searching for consistency.  Again, this is nothing new to Cats fans, but it's still a story we're all nervous about - no matter how much better Michael Porter has looked lately.  Kansas State has a handful of good, but not outstanding guards and I think we'll finally see for the first time what we have in both Porter and freshman DeAndre Liggins.  They should dominate Longwoods and Delaware States and get out-played by the North Carolinas, but how do they stand up to teams closer to the middle of the pack?  Kansas State's guards might be the first step in actually seeing what UK has at the position.  That's it for now.  I know today was a little weak, but hopefully you all enjoyed the family time and you're ready to get back on board with us on Friday as we get prepared for a HUGE weekend in UK sports.  I'm as anxious about the UT-UK football game as I've been for a Cats game all season and the basketball tournament has me all fired up as well.  So, make sure you've got a full battery on the cell phone today so you can get your KSR updates while you're holding the wife's bags, you coward.  See you this afternoon...