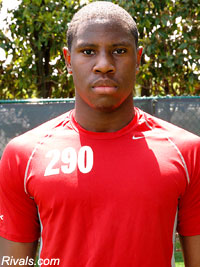 According to Scout.com, South Carolina athlete David Sims, who had committed to UK and then said to be "confused", has changed his verbal to Georgia Tech.  Sims, a three-star player who would likely be a RB at UK, has been one of the most productive high school players in the history of the state. This year, he's rushed for over 1,300 yards and passed for over 1,800 and has over 50 combined TDs playing QB and safety. Many felt that Sims had the potential to be the highest ranked recruit in UK's class when the final rankings came out.  Sims will now take his talents to Paul Johnson's option attack and be forced to mingle with ugly girls for his entire college experience.  He does have The Varsity working in his favor though.

According to ESPN, Sims is "an exciting play-maker" and will be molded into "a great college player". He was also recruited by Michigan, Florida, Alabama, Florida State, Oregon, Tennessee, North Carolina, Duke and Colorado.