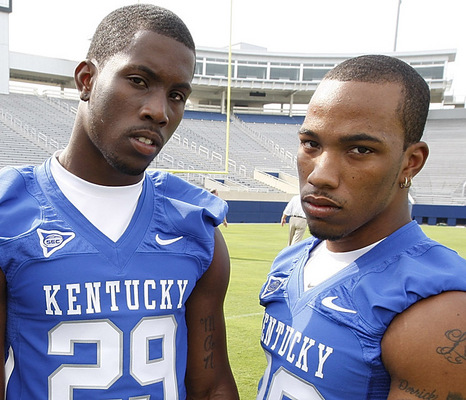 For the third time in 2 weeks, Twitter has reared its head in the UK sports world. This time however it isnt a player making a mistake, but a player taking up for his teammates and putting a few random idiot fans in their place. After the loss last night, a few fans tweeted messages to Derrick Locke suggesting that UK needed to replace Mike Hartline with a different QB. That tired argument has been stated to players all year and they are generally sick of hearing about it, and Derrick Locke summed up their feelings with this tweet: For the next person who tweets me saying we need a new qb...how bout u try jumping off a cliff first Locke's words are ones that I think most players would like to say to the small, but consistent, group of fans who feel the need to trash players or their teammates directly to them on Twitter. It is a habit that saw its worst manifestation in the "Mark Hamilton-Daniel Orton-Escape Goat" fiasco this summer, but it still happens on a small level all too often. Here is a word of advice to fans...you have a right to your opinion and can certainly criticize coaches, players, teams, etc on your own time. But there is no reason to contact them via social media and tell them negative opinions. It is rude and counterproductive and only serves to make them mad at the fanbase that you profess to be such a strong member of. Kudos to Locke for taking up for his teammate and as show of solidarity, KSR promises this. The next time a UK fan (and we will make sure it isnt just an imposter) writes trash talk to a player, their name and picture (if it can be found) will end up on this site. We will see (as Mark Hamilton found out last Spring) if they are quite as tough when the anonymity goes away and their identity is known by the state as a whole.