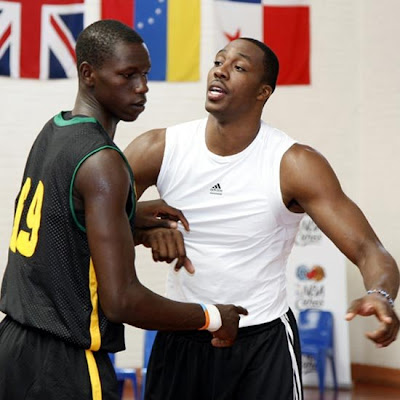 I just talked to Huntington Prep big man Gorgui Dieng, a 6-10 center in the 2010 class, and he indicated that a commitment may be coming soon. Dieng visited Rupp Arena for Kentucky's victory over South Carolina on Thursday night and spent Friday at Louisville. He said, "both visits were great." I told him that there were rumors that he was planning to make a commitment on March 15th. He responded, "I might do that (commit) before March 15 because I want to concentrate on class." I asked him if the rumors that he is leaning towards Louisville are true and he confirmed that he indeed wants to be a Cardinal. Dieng, a native of Senegal, speaks five languages, but English is closer to his fifth language as he has only lived in America for a few months now. I wanted to make sure that we were on the same page so I asked him if plans to commit to Louisville: "I want to," he confirmed. I asked him what he likes about Louisville: "I like the people over there. I have a nice friendship with Coach P and I like so much how they play. Like their fast break." When I asked him if he has a date when he will commit, he laughed and said, "In my mind." While he wouldn't specifically give a date, he did confirm that it will be soon. So, there you have it, unless something changes, Gorgui Dieng will likely be a Louisville Cardinal. Follow me on Twitter for updates and breaking news Check out my AllKYHoops.com site for coverage of all basketball in Kentucky