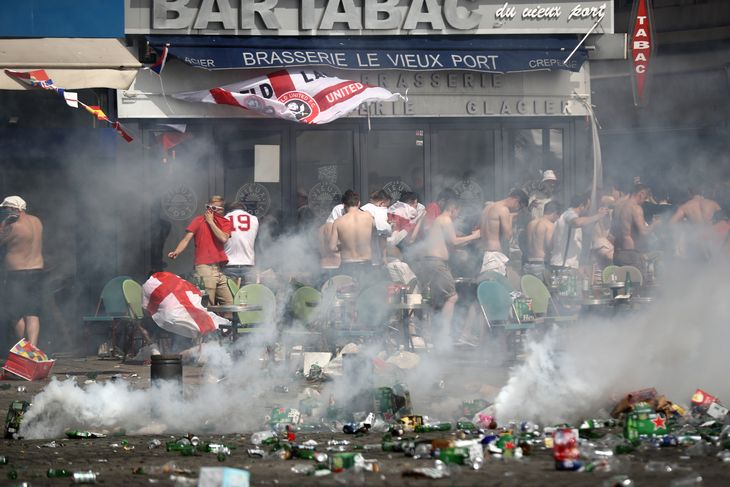 @SBNation[/caption] "Drunk football fans start fight" is a common headline across the pond but drunk football fans are stepping up their game in France for Euro 2016. Security was increased ahead of the major soccer tournament that falls two years in between each World Cup.  The extra security measures were for terrorists, not drunks, but the drunks certainly need it. Before Russia and England squared off in Marseilles, things turned violent.  Not "UK is going to the Final Four, let's go to State Street" violent, this is bloody violence. [caption id="" align="alignnone" width="431"]

Their primary weapon is beer bottles.

That doesn't mean they can't use the chair.

Police responded with water cannons and tear gas to contain the crowd.

Scene in Marseille as French police clash with fans ahead of the England vs. Russia game #Euro2016(via @Onefootball) pic.twitter.com/dKs8WEBNil – Alex Ogle (@Alex_Ogle) June 11, 2016

They responded to the water with fire.

"I'm scared of immigrants coming to the UK because I feel like we're losing our values" These values? #Marseille. pic.twitter.com/qM8IvLTAWd – Haidar Sumeri (@IraqiSecurity) June 11, 2016

It didn't end when they got to the game.

Violence continues in the stadium at the end of the England-Russia #Euro2016 soccer match pic.twitter.com/9mw3G6vimT

The winner of the fight?  No one.  Russia forced a draw with a goal in the 92nd minute.